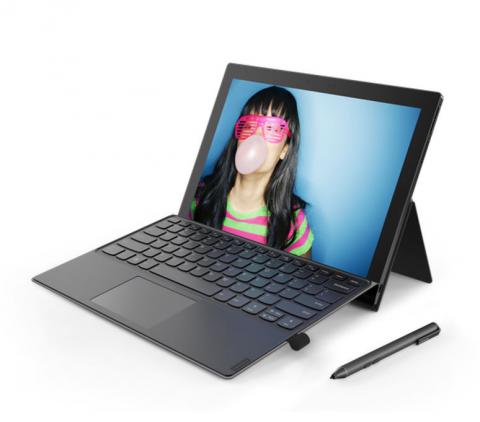 In addition to X, T, and L series models, the laptops unveiled today include the Miix 630 (pictured), the hardware maker’s first Windows 10 device powered by an ARM-based processor. By Rich Freeman
Tweet

Lenovo has pulled the wraps off an extensive series of new and updated notebooks, including its first Windows 10 device with an ARM-based processor, as well as a graphics dock designed to let Ultrabook users enjoy desktop-like data transfer speeds and video performance.

The announcements were made yesterday and today at the 2018 Consumer Electronics Show, which is now underway in Las Vegas.

Other new laptops introduced today fall within Lenovo’s X, T, and L families. The X series debuts include a new sixth edition of the ThinkPad X1 Carbon equipped with 8th Generation Intel Core processors and an optional Dolby Vision high dynamic range (HDR) display, as well as optional support for multi-touch functionality. The 14-inch device weighs just under 2.5 pounds and, according to Lenovo, provides up to 15 hours of battery life.

All three devices come with Crystal Image, Lenovo’s version of the lightweight, bloatware-free Signature Edition of Microsoft’s Windows 10 operating system. According to Lenovo, Crystal Image also establishes a foundation it will draw on in the future to support Microsoft’s AutoPilot self-provisioning and configuration technology.

Available this month, the latest ThinkPad X1 Carbon and ThinkPad X1 Yoga will have list prices starting at $1,709 and $1,889 respectively. The revamped X1 Tablet ships in March, and will list at $1,599 and up.

Accessories for those devices include a variety of docks and carrying cases, plus the new ThinkVision X1 monitor, a 27-inch, 4.7mm UHD display with a nearly borderless bezel. It reaches market this month, at price points to be announced later.

New T series laptops introduced today include the T480, T480s, and T580. At just 0.7 inches, the T480s is only 0.1 inches thicker than the pricier ThinkPad X1 Carbon. Like the other T series models showcased at CES, it supports dual battery configurations that Lenovo says are capable of providing up to 27 hours of battery life.

Lenovo Has Device as a Service and Programs for MSPs Coming This Year
January 12th, 2021

ChannelPro 5 Minute Roundup for the Week of January 11th, 2021
END_OF_DOCUMENT_TOKEN_TO_BE_REPLACED

Jabra PanaCast Review - Get Your Huddle On
END_OF_DOCUMENT_TOKEN_TO_BE_REPLACED