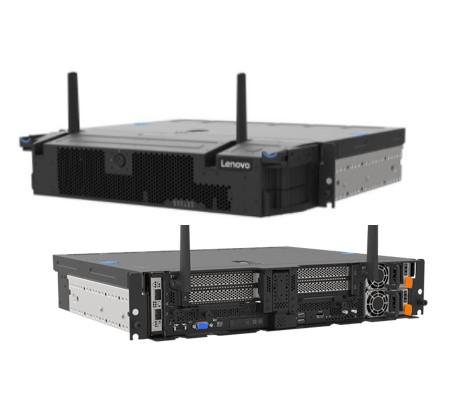 Capable of supporting up to four NVIDIA GPUs, the ThinkEdge SE450 is designed for use in retail, manufacturing, and smart city solutions with heavy compute requirements and limited space. By Rich Freeman
Tweet

Lenovo has shipped the latest addition to its steadily growing line of edge computing servers.

The new ThinkEdge SE450, which the hardware maker unveiled today and will begin shipping next March, is designed to support compute-heavy artificial intelligence and private cloud workloads in retail, manufacturing, smart city, and other settings outside the data center. Powered by a single-socket 3rd Gen Intel Xeon Platinum processor with up to 36 cores, the device can accommodate up to four single-width NVIDIA graphics cards or two double-width cards.

“This is a purpose-built edge server that can host the most GPUs on the market today,” says Charles Ferland, vice president and general manager of edge computing and communication service providers at Lenovo.

Built for locations with limited space, the SE450 features a 2U case that’s less than 12 inches deep, Ferland notes, so users can install it in a network or telecommunications closet. Power and cabling are all accessible from the unit’s front to make that deployment scenario easier. The compact size makes mounting it on the wall or under a desk an option too.

The device supports up to 42 TB of storage and comes with Wi-Fi 6 connectivity. Security features include a lockable bezel and built-in tamper detection. “If somebody opens the cover of the server, we will lock down the data to protect it,” Ferland says.

“We simply can’t send IT technicians to all of those locations all the time,” Ferland observes.

Pricing for the new product has yet to be disclosed, but buyers will have the option of paying on a subscription basis via Lenovo’s TruScale as-a-service purchasing program. Lenovo’s entire catalog of PCs, tablets, edge computing devices, data center gear, and more has been available through TruScale since September.

The SE450 joins earlier ThinkEdge servers, including the SE30 and SE50, embedded computers unveiled in March with Intel Core processors. The SE70, which debuted in September, is designed for edge AI use cases with lighter requirements than those the SE450 can handle. New versions of the SE350 pre-loaded with an edge-optimized combination of VMware’s vSphere, vSAN, and Tanzu solutions reached market in September.

At present, some 10% of business data is created and processed outside a traditional data center or cloud, according to Gartner, which expects that figure to reach 75% by 2025. Fully 69% of manufacturers use edge computing solutions already, according to data from IDC Research, sponsored by Lumen Technologies, published in April.