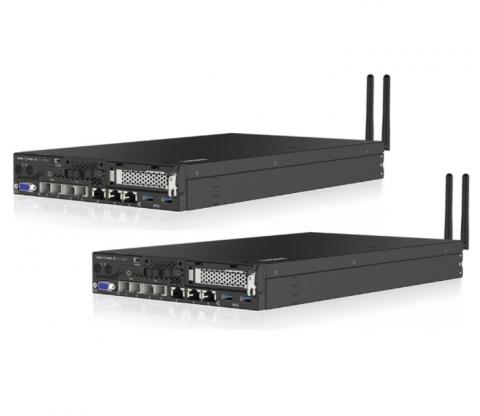 The new offering features two Lenovo ThinkSystem SE350 edge servers pre-loaded with an edge-optimized software suite from VMware that combines its vSphere, vSAN, and Tanzu products in one package. By Rich Freeman
Tweet

Announced on the eve of the hardware maker’s annual Tech World conference tomorrow, the new solution shipped alongside an enhancement to Lenovo’s Open Cloud Automation system that similarly aims to simplify edge computing deployment and administration.

The VMware solution features two Lenovo ThinkSystem SE350 edge servers pre-loaded with a new software suite from VMware that combines the company’s vSphere, vSAN, and Tanzu products in a single edge-optimized package. Lenovo is the first vendor to reach market with that product, which VMware will officially introduce at its VMworld conference next month.

Operators of retail outlets, gas stations, quick serve restaurants, and other distributed sites that wish to analyze and act on data from inventory management, theft prevention, and other applications closer to where it’s generated are likely to find the new VMware bundle appealing, according to Charles Ferland, Lenovo’s vice president of edge computing. “It’s way too expensive to back haul all of the traffic to a central office,” he observes.

Companies that already use VMware software and Lenovo hardware at their core computing facilities are a target market for the new offering too, Ferland continues. “We wanted to provide a very simple and easy way to take that same environment they have with VMware and Lenovo in a data center and stretch that all the way to edge sites,” he says.

Bundling Lenovo hardware with VMware’s new edge solution in a single SKU also simplifies licensing for such businesses, Ferland adds, and saves space by enabling software that previously required four servers and external switches to run on two devices with built-in switching instead. “If you’re going to put this in 5,000 gas stations all over the country, that’s a big footprint,” says Ferland of the earlier configuration.

The new solution eases infrastructure implementation burdens for partners as well as their clients, according to Lenovo. “They can spend more time working with the customer on services,” says Ferland, noting that designing and optimizing services is typically more profitable for channel pros than installing backend infrastructure.

End users who wish to can pay for the new edge solution through TruScale, Lenovo’s consumption-based, as-a-service purchasing program, rather than dip into capital budgets.

The new system is available from Lenovo now. VMware will reveal pricing for the software portion of the solution next month during VMworld. Ferland expects those fees to compare favorably to purchasing vSphere, vSAN, and Tanzu separately.

Introduced last year, Open Cloud Automation is designed to streamline the deployment and configuration of Lenovo servers. The update introduced today lets organizations use that system, which was originally designed for data centers, at edge locations too.

At present, some 10% of business data is created and processed outside a traditional data center or cloud, according to Gartner, which expects that figure to reach 75% by 2025.

“It’s a fast-growing market,” says Ferland of edge computing. Companies that experimented with proof of concept and pilot implementations in 2020, he adds, are increasingly putting new systems into full-scale production.

Lenovo offers pre-assembled infrastructure bundles in partnership with vendors other than VMware. A year ago, for example, the company shipped a set of hyperconverged infrastructure solutions that utilize software from Nutanix and Microsoft.

ChannelPro 5 Minute Roundup for the Week of August 8th, 2022
END_OF_DOCUMENT_TOKEN_TO_BE_REPLACED