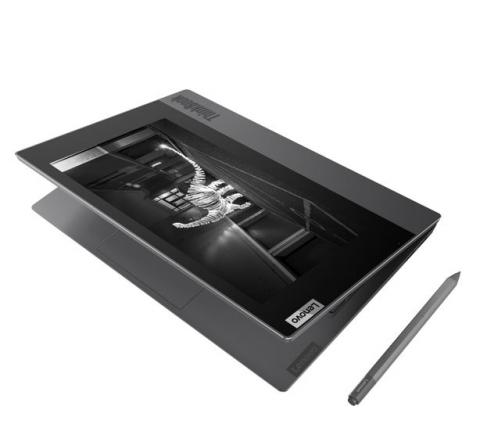 The new ThinkBook Plus (pictured) features an e-ink display on the cover that lets meeting attendees capture diagrams and notes without opening the lid. The new consumer devices include Lenovo’s first 5G laptop. By Rich Freeman
Tweet

Lenovo has unveiled the latest addition to its ThinkBook product family for SMBs, as well as a fresh crop of laptops and Chromebooks for consumers.

Introduced three days after an earlier wave of ThinkPad and smart office products, the new devices made their debut at the 2020 CES conference, which is taking place this week in Las Vegas.

The new ThinkBook, called the ThinkBook Plus, features both a 13.3-inch FHD main display and a separate 10.8-inch e-ink display on the cover. When used in tandem with the unit’s built-in Lenovo Precision Pen, the outside panel is designed to help meeting attendees capture diagrams and notes without opening the lid. To keep users focused during meetings, the clamshell laptop shows only essential items like upcoming calendar appointments, instant messages, and important emails on the cover.

The ThinkBook Plus runs on 10th Gen Intel Core processors and comes with a standard SSD as well as optional Intel Optane storage. Intel plans to begin shipping the new product in March for $1,199 and up.

Lenovo introduced the first two ThinkBooks last May, and then added two additional units later in the year. The product line’s combination of style, affordability, and durability won Lenovo a place on ChannelPro’s 2019 list of All-Star award winners. 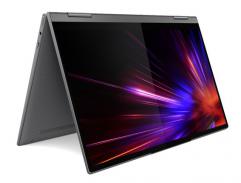 Among the consumer-oriented laptops announced today was the Lenovo Flex 5G, which will be known as the Yoga 5G outside of North America. According to Lenovo, it’s the world’s first 5G PC, though HP Inc. made a similar claim about one of its new products yesterday.

Also the first PC to run on the Qualcomm Snapdragon 8cx 5G Compute Platform, according to Lenovo, the Flex 5G comes with nine built-in antennas that support both millimeter wave full-band and sub-6GHz 5G networks. 5G service for the device will initially be available exclusively through Lenovo’s launch partner, Verizon. Lenovo says the device enables download speeds of approximately 4Gb/s3.

The Flex 5G’s 14-inch Full HD IPS touchscreen offers 400 nits of brightness. Weighing in at 2.86 lbs., the unit features Qualcomm Adreno 680 graphics and user-facing stereo speakers powered by Dolby Atmos. The battery, according to Lenovo, lasts up to 24 hours on a charge.

Though the Flex 5G is tailored to the consumer market, Lenovo has commercial 5G products in development as well. Selling and supporting those systems will be rich sources of incremental revenue for IT providers in 2020, according to Rob Cato, Lenovo’s vice president or North American channels.

“I think that’s really going to open up a whole new area of opportunity for us and our channel partners,” he says.

Also new for CES are the IdeaPad 14 and IdeaPad 15, clamshell laptops primarily for consumers that will be collectively named the Yoga Slim 7 outside of North America. Both devices utilize Lenovo Q-Control Intelligent Cooling technology powered by artificial intelligence to increase battery life by an average of up to 20 percent, according to Lenovo.

ICYMI: Our Channel News Roundup for the Week of January 23rd, 2023
END_OF_DOCUMENT_TOKEN_TO_BE_REPLACED