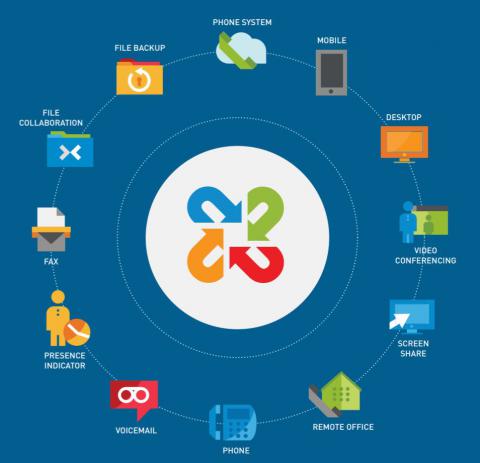 Called Unite and targeted at businesses with up to 100 users, the system includes tightly integrated voice, cloud PBX, collaboration, file storage, and backup features, as well as all-new mobile and desktop apps and an enhanced web portal. By Rich Freeman
Tweet

Building on an existing foundation as a provider of voice and hosted PBX services, cloud application vendor Intermedia has rolled out a new unified communications-as-a-service solution equipped with an extensive array of tightly linked collaboration and administration features.

Though several of those components were available separately before, and remain so now, Unite brings them together in a single, seamless application, according to Intermedia CEO Mike Gold.

“It’s a tight integration of all of these things in one experience,” he says.

The system integrates with Microsoft Active Directory implementations as well. “If you’re using a third-party Active Directory, we can easily talk to that, so users just get sucked right in,” says Mark Sher, Intermedia’s vice president of unified communications product and marketing.

Though Unite’s cloud PBX technology is entirely new, the system draws on the same network and support resources as Intermedia’s earlier voice products, and is backed by the same “five nines” SLA, Sher adds.

Unite is available both in a base SKU and a Pro edition with extra collaboration and file storage capacity. Pricing on the base version, Sher emphasizes, is the same as Intermedia’s former hosted PBX system, despite all of the additional functionality.

“We’ve really stepped up the product very considerably, and you’re getting it for the same price as our cloud PBX,” he says.

Both editions are priced on a per user, per month basis and don’t require contracts.

According to Sher, Unite’s robust feature set and underpinnings make it a more appropriate fit for larger businesses than its earlier, PBX-only offering.

“The older cloud PBX solution was really targeted to that under-20 [user] business,” he says, noting that while companies in that size range were the first to embrace VoIP broadly, larger organizations are adopting IP-based voice services in growing numbers as well. Unite, which targets organizations with up to 100 users, arms channel pros to go after those bigger accounts.

“We’re going to enable them to sell further upmarket, sell larger opportunities, because that’s where the market is moving,” Sher says.

As businesses at the upper end of the SMB spectrum tend to have more sophisticated administrative requirements than smaller businesses, Intermedia has added a wide range of management and configuration options for Unite to its HostPilot control panel.

“If you want to really go in and customize things, it’s all there,” Sher says.

LG Gram for Business 17 (2020): Big Reasons to Like It
END_OF_DOCUMENT_TOKEN_TO_BE_REPLACED