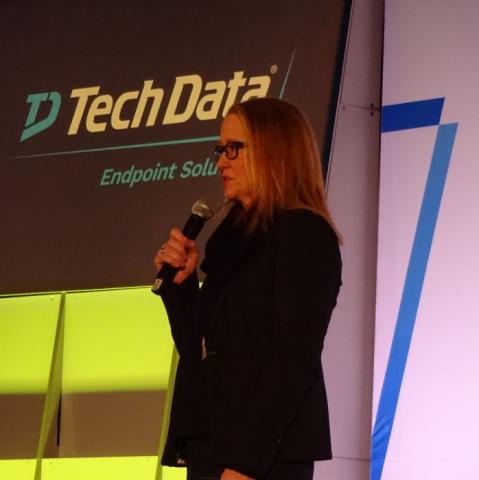 The distributor will invest heavily this year in driving awareness of the subscription-priced procurement offering and helping partners already familiar with it sell the program more effectively, according to Senior Vice President Linda Rendleman (pictured). By Rich Freeman
Tweet

“Interest is on par or higher than what we expected, but that adoption gap is larger than we anticipated,” says Derek Eling, business development manager for Tech-as-a-Service. Eling spoke yesterday at Tech Data’s 2019 Endpoint Symposium, which wraps up tomorrow in Westminster, Colo.

Introduced in December 2017, Tech-as-a-Service lets end users pay for hardware and software—singly or in solution-based bundles—through recurring monthly installments, while enabling partners to collect their share of the contract in full upfront. The model is a profitable one for resellers who take advantage of it, according to Linda Rendleman, Tech Data’s senior vice president of endpoint solutions for the Americas.

Demand for subscription-priced procurement options is climbing fast among end users as well. Indeed, device-as-a-service (DaaS) spending is up 31 percent in the last year, according to NPD, which expects 41 percent of companies with up to 50 employees to invest in DaaS agreements in the year to come.

Juan Fernandez, vice president of managed IT services for ImageNet Consulting LLC, a solution provider and MSP headquartered in Oklahoma City, Okla., has experienced that trend firsthand. “SMB has been a real sweet spot for us right now,” he said during a panel discussion about DaaS at the symposium yesterday.

Getting more partners to recognize and participate in the as-a-service opportunity, however, has been challenging for Tech Data. Some of that is to be expected with something as new to traditional VARs as annuity-based selling, according to Marc McClure, Tech Data’s senior vice president for U.S. field sales.

“There’s always a little bit of a headwind on adoption,” he says. “People don’t have a tremendous amount of time or energy to try these things.” That goes double for salespeople, who are leery of delaying or complicating deals by introducing unfamiliar elements like new consumption models. “The traditional mindset of an account executive within a solution provider is they will do everything possible to not slow an opportunity down,” McClure says.

And push back from end users new to as-a-service buying can in fact slow down deals, according to Anthony D'Ambrosi, CEO of ATSG Inc., an MSP and systems integrator based in New York. “There is a little bit of apprehension over the cost of the endpoint,” he said yesterday during a speaking appearance at the symposium.

According to Fernandez, some partners worry about the impact as-a-service selling could have on cash flow as well. “It’s hard for us in the IT world to adopt that model when we don’t have a financial arm,” he says.

Tech-as-a-Service, however, is designed to spare resellers and manufacturers alike from such issues. “The end user gets to enjoy the product in a consumption model, but the vendor and the partner will both recognize the sale right upfront as if it was a traditional IT sale,” McClure notes.

ICYMI: Our Channel News Roundup for the Week of January 23rd, 2023
END_OF_DOCUMENT_TOKEN_TO_BE_REPLACED