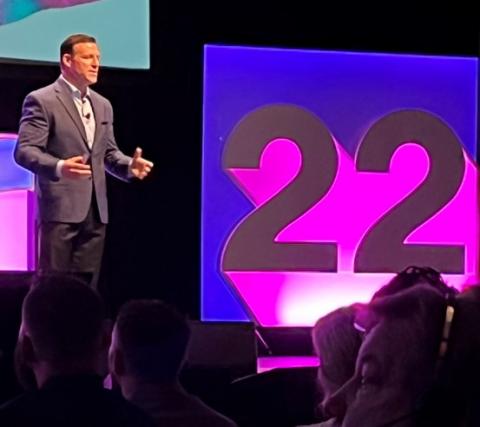 CEO Paul Bay (pictured) and others at this week’s conference in Miami say the company is spending heavily on programs and financing aimed at helping partners acquire, retain, and sell more to buyers of cloud products and services. By Rich Freeman
Tweet

Exploding consumption of cloud solutions is filling Ingram Micro’s coffers. Platinum Equity, the private investor that bought Ingram for $7.2 billion last year, is making further capital available to the company. And what Paul Bay, Ingram’s CEO since the start of this year, most wants attendees at this week’s Ingram Micro Cloud Summit event in Miami to know is that the company is putting that money to work on their behalf.

That’s not out of keeping with current momentum behind cloud adoption more generally, which was strong before the coronavirus pandemic’s arrival two years ago and has become even stronger since then, as businesses with hybrid remote and office-based workforces rapidly embrace software and infrastructure as a service. Indeed, global end user spending on public cloud services will grow 20.4% this year to $494.7 billion, up from $410.9 billion in 2021, according to Gartner, which expects that figure to reach nearly $600 billion in 2023.

“Our industry is where the action is,” said Victor Baez, Ingram’s senior vice president of cloud channel sales, during a presentation today.

Ingram’s cloud partners are cashing in on that fact, he added. “37%, more than one out of three of you in this room, has experienced growth rates of 100% or more in your cloud business last year,” Baez said.

Ingram’s vendor partners are feeling the effects of that online goldrush too. Cloud migration, management, and data protection vendor AvePoint, for example, recorded a 45% year-over-year spike in SaaS revenue during its latest fiscal quarter, which concluded in March.

The investments Bay alluded to in his keynote, which include the Flexible Subscription Engine that Ingram introduced last November, are designed to sustain the company’s cloud momentum. Though he declined to quantify Ingram’s spending on partners, Bay broadly characterized it as substantial during a conversation with ChannelPro today.

“It’s one of our single biggest investments we’re making,” he said. Platinum Equity, Bay added, while not directly responsible for those outlays, enthusiastically endorses them. “They’ve absolutely been a great partner in supporting us and accelerating how we can make those investments to get to where we need to be.”

Richard Tallman, senior director of global cloud and MSP at security vendor Bitdefender, has been impressed by both the scale and specific contours of Ingram’s partner success spending.

“That’s a big differentiator with Ingram globally,” he says. “They look at the entire business of the partner to make them a healthy partner so that they can grow and not just get the next order.”

ChannelPro 5 Minute Roundup for the Week of November 21st, 2022
From the Library to the Data Center
END_OF_DOCUMENT_TOKEN_TO_BE_REPLACED