Ingram Micro Sees “Recession Proof” Year Ahead for IT 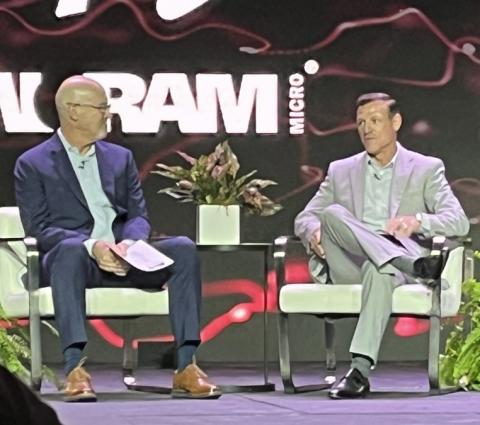 On the opening day of its annual ONE conference, execs Kirk Robinson and Paul Bay (pictured left to right) said the distributor will continue investing in strategic resources like its Xvantage “digital experience” despite economic and geopolitical headwinds. By Rich Freeman
Tweet

Distributors often thank attendees for their business and loyalty at partner conferences. During a keynote address at the start of Ingram Micro’s ONE event in Orlando this morning, however, Kirk Robinson voiced a little more gratitude than usual. The last two years, he noted, have been marked by a global pandemic, logjammed supply chains, war in Europe, skyrocketing inflation, rising interest rates, and more.

“Yet despite all this, Ingram Micro put up two of the best years in the company’s history, and we owe our success to you, our channel partners,” said Robinson, an executive vice president at the company and president of its North American unit.

Better yet, he continued, Ingram and its partners alike have reason to expect more growth ahead despite widespread fears of an economic downturn. “The good news is, if you listen to the tech analysts, they’re all saying that IT spending is recession proof,” Robinson said. “They’re saying investing in technology is widely considered a business driver and not just a cost.”

Gartner in particular, he noted, expects global technology spending to climb 5% to $4.6 trillion next year.

Paul Bay, Ingram’s CEO, struck a similarly upbeat note during a Q&A appearance with Robinson this morning. Yes, he conceded, sales of products like laptops and webcams in huge demand earlier have slowed recently, but there’s plenty of opportunity in other markets.

As a result, Bay added, Ingram has no plans to slow spending on strategic initiatives. “No matter the times and the issues that we can’t control, we’re going to continue to invest,” he said.

Much of that investment will flow toward ongoing efforts by Ingram to establish itself as a leader in ease of doing business and partner satisfaction.

“We in the Ingram family firmly believe that the way for us to compete and win in this channel is to be completely customer obsessed, providing the best customer experience every day and delivering real value to our partners,” said Robinson in his keynote, noting that partners no longer define value simply as better margins or faster shipping. “You want us to take complexity out of your business and provide the right services at the right times to help you run your business, grow faster, and do more for your customers.”

Ingram’s Xvantage “digital experience” is core to its plans for realizing that goal. Previewed in May and shipped in September, the system aims to connect partners, vendors, and Ingram’s own employees in a unified, streamlined, heavily automated online ecosystem backed by extensive artificial intelligence.

At present, over 41,000 Ingram partners worldwide have migrated onto Xvantage, including more than 25,000 in North America. Robinson, who expects all of the company’s North American resellers to have made the switch by the first week of December, is among many Ingram executives not afraid to set high expectations for the platform’s importance and impact.