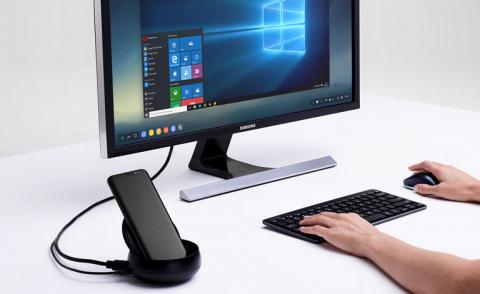 The new offering enables students, freelancers, and other home users to deploy virtual Windows desktops powered by Amazon WorkSpaces to select Samsung smartphones and then stream them to full-sized displays via Samsung’s DeX docking station. By Rich Freeman
Tweet

Users can then enjoy a PC like experience, complete with keyboard and mouse, on any display with an HDMI port using the DeX docking station that Samsung introduced in March.

According to Irvine, Calif.-based Ingram, the easy-to-use service eliminates the deployment complexities that have kept students, freelancers, entrepreneurs, and other home-based knowledge workers from adopting virtual desktops as rapidly as businesses have.

Ingram plans to give its U.S. resellers a similarly intuitive and automated tool for installing Amazon-based Windows desktops on Samsung handsets later this year via its Ingram Micro Cloud Marketplace. The distributor already offers bundled solutions with the same components to the channel through traditional ordering processes today, but says that adding them to the Cloud Marketplace will make provisioning desktop-as-a-service solutions easier.

“Our culture is fast becoming a mobile society and both businesses and home users alike are starting to want ‘on the go’ access to office and communication tools,” she says.

Equipped with a specialized, desktop-style UI complete with resizable windows and contextual menus, the Samsung DeX enables Samsung Galaxy users to run any mobile or cloud app they can get to from their smartphone on a full-sized display. Ingram views virtual desktops as an especially promising use case for the device, though, with promising implications for channel pros.

“There’s growing adoption for desktop as a service across businesses,” Bergeron says. “With the release of Samsung’s new devices and the DeX capability, we see this opening up a whole new segment for mobile virtual desktop computing.”

Ingram is betting big on as-a-service solutions more broadly. The distributor introduced a subscription-based hardware program for example in August 2016, and expanded it to include a wider array of financing terms this May.