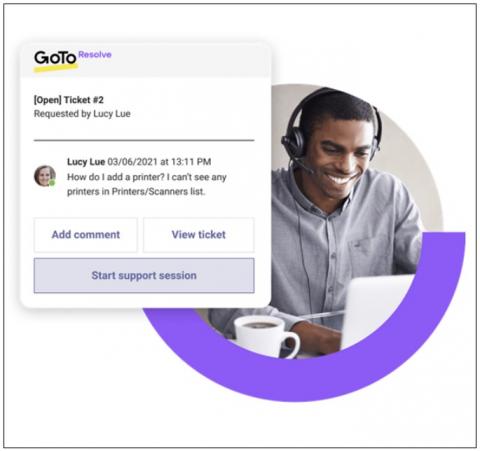 The new functionality lets GoTo Connect users create helpdesk tickets on their own and lets GoTo Resolve generate tickets automatically based on preset conditions. A new bundled licensing option also lets users purchase both products together at a discount. By Rich Freeman
Tweet

GoTo has rolled out tighter ticketing integration between its GoTo Connect unified communications-as-a-service solution and GoTo Resolve remote IT access and support platform, and introduced a bundled licensing option for purchasing both products together.

Available now at no extra charge in North America, with global availability to follow, the new helpdesk functionality lets GoTo Connect users create tickets for technical problems on their own and lets GoTo Resolve users generate tickets automatically based on pre-defined conditions, such as deteriorating call quality.

“It enables end users to communicate more effectively with IT people, but it also enables IT administrators to be proactive and not just reactive,” says Paddy Srinivasan, formerly GoTo’s chief product and technology officer, who became the company’s CEO last week.

The automated ticketing feature adds extensive workflow capabilities to existing network monitoring connections between GoTo Connect (which includes the GoTo Meeting conferencing system) and GoTo Resolve, Srinivasan adds. “It’s not just a one-way communication from the endpoint to the admin,” he says. “They can also manage the whole lifecycle of that ticket now—find out who is raising that ticket or which endpoint the ticket came from, assign it to specific IT admins, look at the priorities, stack rank them, and manage the workflow on the IT admin side.”

The new licensing bundle, called GoTo Essentials, offers the Standard editions of both GoTo Connect and GoTo Resolve for a heavily discounted starting price of $24 a month per user, per seat.

“It’s a very compelling all-in-one price and also [provides] the advantage of having a single invoice,” says Srinivasan, who expects the new offering to prove especially appealing to businesses with either no IT department or a small one.

“A vast majority of our customers have less than 250 employees,” he notes. “That’s the sweet spot we’re going after.”

In addition, Srinivasan continues, telco partners and other channel pros who don’t currently provide managed services can sell the GoTo Connect part of the Essentials package to clients and use the GoTo Resolve portion themselves to provide better support. “They’ll look like heroes in front of their customers because now they can set up proactive alerts,” he says.

Formerly known as LogMeIn, GoTo adopted its current name some six months ago on the same day it shipped the first release of GoTo Resolve, in a move aimed at unifying everything the company sells in a single closely integrated platform under a common name, rather than juggling the LogMeIn and GoTo brands separately. LogMeIn acquired the GoTo product line from Citrix in 2016.

“The point of the rebrand was to remove cognitive overhead for our customers,” Srinivasan explains. “We said, ‘let’s just simplify everything and bring everything into a single application, both for the end users as well as for the administrators.’”

Today’s updates are the latest step in that journey, which remains ongoing. Other, quieter recent milestones include equipping the Connect-based contact center solution that GoTo introduced in March with “co-browsing” functionality based on remote access technology in GoTo Resolve that lets customer service personnel and end users navigate online purchasing forms and other web pages simultaneously.