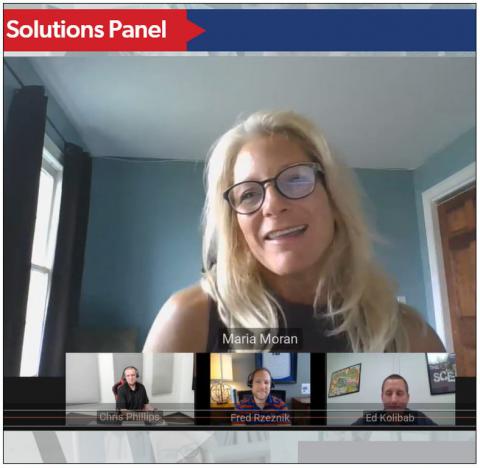 Six-plus months into the COVID-19 era of IT, old challenges remain and new opportunities are emerging, according to speakers at distributor D&H’s virtual THREADcast event yesterday and today.

Among the persistent difficulties, as many channel pros know firsthand, is finding critical work-from-home gear like webcams and headsets, which have been in short supply since much of the U.S. went into lockdown earlier this year.

“We keep eight to 10 weeks of safety stock in our American warehouses,” said Mike Freibrun, national account manager at Logitech, during a session yesterday on ProAV and collaboration solutions. “We blew through all of that inventory in a week.”

Though the company has dramatically ramped up production of popular webcam models since then, demand—most recently from students engaged in remote learning—has kept climbing too. “As we start shipping, needs not even double or triple, they quadruple,” Freibrun noted.

“We do not realistically see catching up on webcams until probably January, February of 2021,” he added. “America is asking for tens and tens of thousands of webcams and headsets.”

Remote workers continue to snap up PCs as well, according to Fred Rzeznik, a distribution sales manager at HP who spoke in a THREADcast session today on work-from-home technology. Contrary to popular belief, he noted, laptops aren’t the only form factor home-based users are ordering. While notebooks are the device of choice for the roughly 60% of telecommuters who move from kitchen to bedroom to basement during a typical day in a constant hunt for privacy and silence, employees lucky enough to have a room of their own to work from often have different preferences.

“If I have a dedicated space, maybe mobility isn’t critical to me, so I can get a device like a desktop, which would have maybe more power and could be cost-effective,” Rzeznik said.

Security considerations have sales of Chromebooks rising too, especially in heavily regulated industries like healthcare and financial services, according to Loren Hudziak, staff program manager for endpoint computing at Google, who spoke today in a session on securing hybrid workforces with both offsite and onsite employees. Powered by a read-only OS featuring built-in sandboxing, among other defenses, Chromebooks are a quick, affordable, and relatively low-risk way for businesses to deploy mobile devices to people who work with sensitive data on poorly protected home networks, he observed.

“It takes a lot of the pressure off of the IT staff to spin up a machine, install a gold image, and harden the device before it has to go to the end user,” Hudziak said.

Sales of office collaboration hardware are an additional opportunity worth keeping in mind, according to Chris Phillips, a technical enablement supervisor at D&H who moderated the work-from-home panel. Many employees will continue working from home at least part of the time even after workplaces reopen their doors in larger numbers, he observed. Companies that want to include those people in conferences will need meeting rooms equipped for both in-person and offsite participation.

“It’s something obviously to think about as a reseller when you’re talking with your customers,” Phillips said.