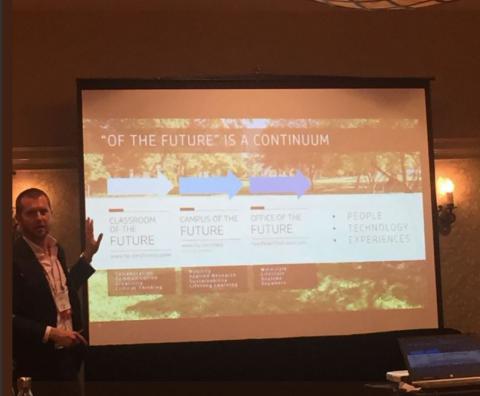 Seeking to position itself as a trusted advisor to its partners, rather than mere “pick, pack, and ship” distributor, the company offered show attendees an expanded lineup of instructional content on emerging and underappreciated revenue opportunities. By Rich Freeman
Tweet

In a vivid example of an ongoing effort to supply business growth advice, rather than just products, to SMB resellers, D&H Distributing Co. dedicated large portions of its 2017 Mid-Atlantic Fall Technology Trade Show in Hershey, Pa., today to educational content about emerging and underappreciated revenue opportunities.

“Historically, the show has had a very sales-minded orientation to it,” says Michael Schwab, the Harrisburg, Pa.-based company’s co-president. “This year in particular, I believe, it’s all about enablement.”

An expanded lineup of seminars and instructional presentations from vendors including Microsoft, Cisco, Intel, HP, Brother, and Lenovo on hot markets like cybersecurity brought that goal to life, as did a series of exhibits on solution categories most channel pros overlook at present.

Those include “connected home” systems from vendors like Google’s Nest unit. Chiefly used in consumer settings at present, the digital door locks and wireless security cameras such companies make are equally suited to use by SMBs.

“Inevitably some of those products will make their way into business environments,” Schwab observes. “You can see quite quickly how they could become a small business solution.”

D&H also encouraged the 900 resellers and dealers expected at today’s show to explore underexploited opportunities in the digital office market. A booth devoted to that topic showcased content digitization and management offerings for customers in targeted industries with specific needs, such as Brother’s secure, HIPAA-compliant scanning solution for medical practices.

A “Gaming Experience” booth, meanwhile, called attention to yet another source of incremental income many channel pros neglect. Indeed, though PC shipments overall declined 0.5 percent on an annualized basis in the third quarter of this year, according to IDC, computer gaming enthusiasts are snapping up powerful laptops and desktops specifically tailored to their tastes and demands in rapidly mounting numbers.

“It is really a compelling and fast-growing market,” Schwab says. “The average selling price is strong, the market is growing, and we’re seeing great takeaway and sell through from these initiatives.”

The increased emphasis on enablement at this year’s October Mid-Atlantic show is but one manifestation of a larger campaign by D&H to position itself as a trusted advisor to its partners, rather than mere “pick, pack, and ship” distributor. The company has long sought to make its exclusive commitment to the SMB channel a competitive differentiator, Schwab notes.

“This is just now the next stage in that evolution where we can take on more of a role helping them succeed in business, not just being a great partner by providing them great products at competitive prices,” he continues.

Other examples of that effort in recent months include the creation of a new team of pre-sales product experts and a new group of strategic business consultants operating under the leadership of Ken Fabozzi, the senior director of VAR field sales D&H hired in August.