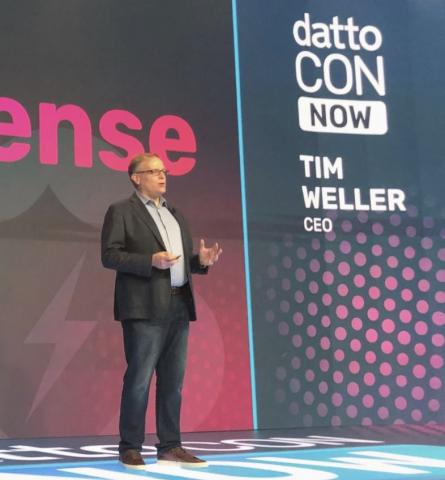 Called SaaS Defense, the system is designed to detect and block attacks on the Microsoft 365 suite’s Outlook, OneDrive, SharePoint, and Teams components. By Rich Freeman
Tweet

Datto has shipped a threat protection solution for the Microsoft cloud.

Named SaaS Defense, and based on technology the company acquired along with security vendor BitDam in March, the new system is designed to detect and block ransomware, malware, phishing attempts, and business email compromise attacks on the Microsoft 365 suite’s Outlook, OneDrive, SharePoint, and Teams components.

According to Datto, the solution is sophisticated enough to identify and intercept zero-day exploits in real time, and prevented more threats while delivering fewer false positives than five similar leading products in head-to-head tests.

“The product has a depth and a breadth that I think will impress people,” said Datto CEO Tim Weller in a conversation with ChannelPro today during the vendor’s DattoCon NOW partner conference. That event, which was originally scheduled to take place in Seattle this week, ran online instead due to concerns about the coronavirus pandemic.

Formally launched weeks after the release of a business continuity solution for Microsoft Azure, SaaS Defense joins an expanding lineup of data protection technologies from Datto that includes the ransomware detection and patch management functionality in its RMM platform, its SaaS Protection cloud-to-cloud backup solution, and its on-premises BDR appliances. DattoCon NOW attendees can download free not-for-resale copies of both SaaS Defense and SaaS Protection.

According to Weller, securing the 300 million Microsoft 365 seats now in use worldwide is both an important responsibility and massive business opportunity for MSPs. Datto has set pricing on SaaS Defense low enough to leave significant room for profit, he adds.

“Many of you told us that your margin from M365 seats doubled when you added Datto SaaS Protection backup and recovery just a couple of short years ago, and now we aim to triple your margin by adding SaaS Defense to this bundle,” said Weller during today’s show. “Think about it as doing well by doing good. You’re doing good security protection for your clients, and you’re doing well growing your business at the same time.”

SaaS Defense arrives at a time of exploding cyberthreat activity. Nearly one in four respondents to Datto’s State of the Channel Ransomware Report, published late last year, reported experiencing ransomware attacks on their clients’ SaaS applications, and 64% of those companies saw attacks within Microsoft 365. Researcher Cybersecurity Ventures, meanwhile, expects ransomware to do $20 billion in damage worldwide this year and $265 billion by 2031.

All of that, Weller said this morning, has been accelerated by the digitization of once physical assets and the diversification of devices used to produce and access those assets.

“It feels like infinite users, infinite demand for applications, infinite endpoints, infinite locations, and unfortunately, an infinite attack surface,” said Weller at DattoCon. “Complexity is rising, and with that rising complexity, we get risk.”

Without citing specifics, Weller indicated that further products for security and other tasks will join the Datto portfolio in the near future. “We’re in the beginning of the largest technology cycle in Datto’s history,” he said this morning.