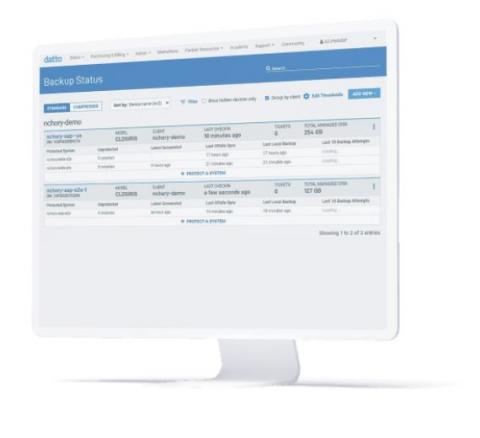 “Everything in terms of the life cycle that you will go through is tuned for an MSP to be able to get things done in the least amount of time with the most velocity,” he says.

To meet stringent recovery time objectives as well, the system can recover workloads within seconds in Microsoft Azure or, if Azure is unavailable, in Datto’s own cloud. The system also comes with an automatic boot verification feature that validates backups are running as expected.

Built-in security features include the Cloud Deletion Defense technology Datto introduced for its other BDR products in March, which automatically syncs backup images to a portion of Datto’s cloud that neither legitimate administrators nor hackers can access. MSPs who need to can then restore one of those locked away images should a primary backup be deliberately or accidentally deleted.

Datto partners can manage the Azure continuity solution through the same multitenant interface they use to administer other Datto products. “It’s exactly the same experience,” Menon says, adding that Datto solicited extensive input from channel pros during the design and testing process to ensure that operating the new system is as convenient as possible for perpetually overworked MSPs.

“We spent a lot of time looking at where our partners are spending the most time and optimized those workflows,” Menon notes.

Available today in the U.S., Canada, and other English-speaking countries, with global availability to follow, Datto Continuity for Microsoft Azure is priced at per terabyte per month rates designed to be easily forecast. Unlike other cloud storage and backup services, Menon emphasizes, Datto doesn’t levy egress charges on the data it stores.

“We’ve taken that unpredictably out of the equation and given an absolutely predictable margin and price point,” he says.

For Datto, meanwhile, adding an Azure continuity solution rounds out a BDR portfolio that already includes solutions for on-premises endpoints as well as two of the world’s most popular SaaS applications, Microsoft 365 and Google Workspace. By extension, the new system offers a hook for establishing relationships with a new set of Azure-oriented partners the company has never had offerings for in the past.