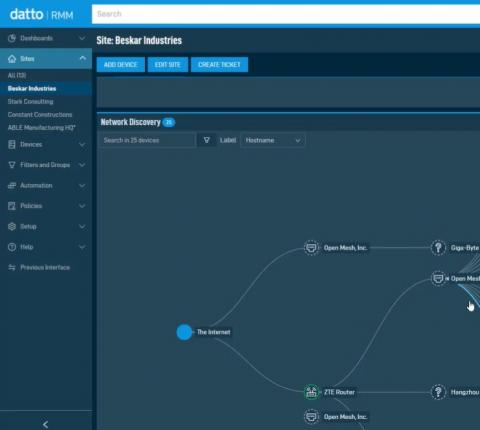 The company showcased those and other enhancements yesterday during its online MSP Technology Day event. By Rich Freeman
Tweet

Datto has added ransomware detection and network topology mapping to its RMM solution and has documentation coming to its PSA system.

The managed services vendor discussed those and other product roadmap milestones yesterday during its online MSP Technology Day event. The company outlined its plans for the future more broadly, now that it’s a publicly traded company, at that event as well.

The anti-ransomware addition to Datto RMM, which like the other updates described at the conference is available now, employs a new behavior-based engine to spot attacks as soon as they start encrypting files. The system then notifies technicians immediately, attempts to kill the ransomware process, and automatically isolates infected devices from other resources on the network, according to Matthe Smit, director of product management for Datto RMM.

“We’re going to make it so that the device can no longer talk to other devices in the network, or even other cloud resources,” he said. “This will effectively stop worm attacks, but more importantly, it will lock out an attacker that might have access to your endpoints.”

Technicians will retain the ability to remote into isolated devices, he noted, to investigate and remediate incidents.

Through next March, Datto RMM users who either purchase 500 new agents or extend their current contract by 12 months can add ransomware detection for all of the endpoints they support at no charge.

Some 60% of MSPs worldwide have at least one client who suffered a ransomware assault in the first half of 2020, according to recently published research from Datto. 11 percent have clients who were struck multiple times in a single day during that period.

The new network topology feature automatically discovers network hardware, including devices not managed by Datto RMM, and maps their relationships.

“You will see if there are new devices on the network, and you can also instantly see if there are devices out there in the network that are currently unmanaged,” Smit said, adding that endpoints in the latter category pose significant security risks. “Unmanaged devices are the weakest link.”

Once a map is in place, users will be able to view alerts on devices, drill into information about those nodes, and initiate a remote connection with one click. Planned enhancements for the new technology, according to Smit, include automated device onboarding, additional remote management functionality, and support for Internet of Things hardware.

“This is really a stepping stone,” he said of the initial release.

Other upgrades to Datto RMM include functionality that lets the system recognize and remote into individual sessions in a hosted multi-user virtual desktop infrastructure environment like Microsoft Windows Virtual Desktop (WVD), and a “maintenance mode” feature that technicians can use to temporarily suspend alerts on endpoints they’re working on.

“It will stop critical tickets from happening if you’re just rebooting a server, for example,” Smit said, noting that the feature has been one of the most heavily requested among Datto partners for some time.

The addition of documentation to Datto’s Autotask PSA product will let administrators view and update contextual information about customer assets from directly within service tickets. Unlike Kaseya’s IT Glue and other external tools, Autotask’s documentation feature is built directly into the product.

“It’s not an integrated solution. It’s part of the PSA solution, and you can’t get faster than that,” said Joe Rourke, director of product management for Autotask PSA, during Datto’s online conference.

The system also imports asset information from Datto RMM and the vendor’s BDR solutions; provides access to related assets not referenced in a ticket; and can link to external files in SharePoint or another document repository. Partners can configure the system to import checklists into tickets automatically as well, according to Rourke.

“That’s going to ensure that your techs are going to follow the proper standard process,” he said.

Documentation will be free to users of Autotask PSA’s Premium and Ultimate editions, and available as an add-on to users of the entry-level Essentials edition.

“Leveraging a large global tag library, our tagging engine will automatically find relevant tags by examining the ticket title and the description of the ticket, and it will suggest tags directly to the tech,” Rourke said. “If the right tag is not found, the tech can add that new tag directly to the library so that all subsequent tickets are properly tagged.”

The system tags tickets received via email or a client portal automatically as well. Its goal is to give users troubleshooting a technical problem one-click access to a knowledge base of relevant information about similar issues.

Datto has been shipping updates to its MSP line-of-business tools at least quarterly since 2018.

Jabra PanaCast Review - Get Your Huddle On
END_OF_DOCUMENT_TOKEN_TO_BE_REPLACED