CompTIA Sees Mix of Confidence and Concern Among MSPs 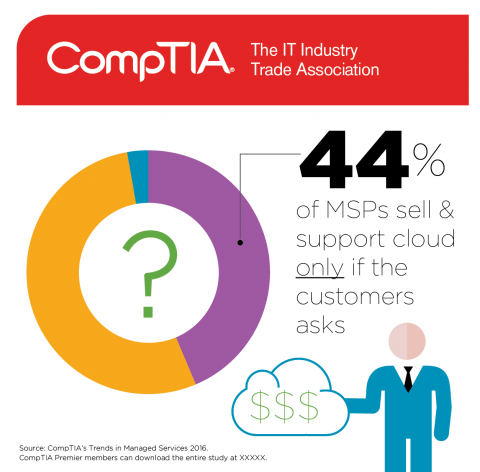 Providers in the U.S. are optimistic on revenue, pessimistic about margins, and losing sleep over cloud computing, according to the results of a newly published research study. By Rich Freeman
Tweet

MSPs are billing more, keeping less, and anxious about the cloud.

Those are just three of many insights packed into a newly published survey of 400 U.S. managed service providers from Downers Grove, Ill.-based industry association CompTIA Inc.

According to the new study, most MSPs have very different expectations for their top and bottom lines. While 95 percent of survey respondents forecast high or medium growth for managed services revenue in the next two years, 53 percent call margin erosion an ongoing concern.

They have only themselves to blame for those diminishing profits in many cases, according to Carolyn April, CompTIA’s senior director of industry analysis, who says commoditization in the managed services space has too many providers engaged in a race to the bottom on pricing.

“When you start to get into the selling on prices only game it’s a downward spiral,” she says.

To make matters worse, she adds, relatively few MSPs currently offer advanced—and therefore profitable—services in areas like analytics, the Internet of Things, and cloud infrastructure management on top of “bread and butter” services like remote monitoring and backup.

“Those areas, and there are others, are where I think the higher margin dollars are going to be,” April says.

MSPs may be missing out on cloud computing profits too, according to CompTIA’s data, perhaps because they view the cloud more as a threat than an opportunity. Some 62 percent of respondents to the CompTIA poll cited cloud computing as a factor keeping them awake at night. That’s largely due to widespread concerns among MSPs that customers are buying services directly from vendors in rising numbers, April believes.

Meanwhile, though 54 percent of surveyed MSPs called supporting cloud solutions a strategic part of their business and a mere three percent offer no cloud services at all, fully 44 percent sell and support cloud-based systems only when a customer asks them to.

“I found that pretty shocking,” April says. “There’s a big role for MSPs to play as the orchestrator of cloud solutions and then the ongoing manager of those cloud solutions for customers.” Such services should play a leading role in client presentations from the very beginning of the sales cycle, she adds.

On a more encouraging note, MSPs are feeling confident about their abilities these days, with two-thirds of research participants describing themselves as skilled experts. That’s up from one-third in 2012, the last time CompTIA ran a comparable study.

“I think that’s significant progress,” April says, adding that it reflects rising experience levels within the MSP community. Of the providers CompTIA contacted, 45 percent have been offering managed services for two to five years while 43 percent have been in the market for five years or more.

“We’re definitely seeing growth in that area,” April says, noting that 40 percent of surveyed providers are using at least one such tool at present. Managed service software vendors will undoubtedly like the looks of that figure too, as it suggests there’s still plenty of untapped upside in core markets.

There’s also apparently plenty of employee turnover among MSPs right now: 80 percent of participants in the CompTIA poll have had one or more technicians leave their firm to join a corporate IT department in the last year alone. Though retaining techs is a challenge throughout the channel, April observes, it appears to be especially acute in managed services, where the hours can be long and the pressures intense.

“I think there’s burnout,” she says, noting that corporate IT jobs have a reputation for being steadier and more predictable.