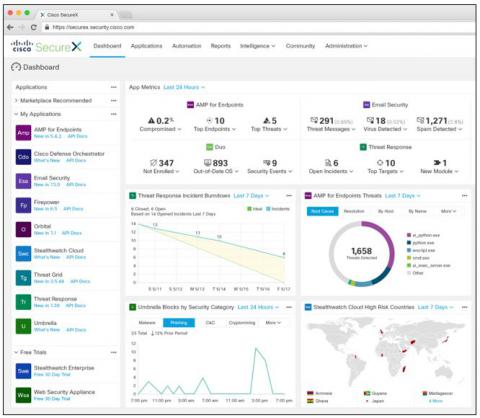 Called SecureX and scheduled to enter general availability in June, the new system is designed to ease the challenges of operating multiple security products with separate administrative interfaces and little inter-platform coordination. By Rich Freeman
Tweet

Cisco has unveiled a free management tool designed to help users monitor and manage its own security solutions and systems from third parties through a centralized console.

The company announced the new offering at the 2020 RSA Conference, which opened today in San Francisco.

Called SecureX and set to enter general availability during the Cisco Live user conference this June, the cloud-based solution comes in response to feedback from partners and customers frustrated by the demands of operating multiple security products with separate administrative interfaces and little inter-platform coordination, according to Ben Munroe, Cisco’s senior director of security product marketing.

“It’s a platform that gives customers visibility across their estate, allows for automation between tools, and comes with out-of-the-box integrations,” he says.

From inside the SecureX dashboard, Munroe continues, users will be able to view customized, role-based metrics about topics like compromised endpoints and pending network security events, plus a list of current threats and summarized real-time telemetry from supported systems.

“You’ll be able to tell if there’s a spike or a change,” Munroe says, adding that technicians will have the ability to investigate and remediate threats from inside the SecureX console as well.

“You don’t have to look at this dashboard and then go into the products. You can do a lot of work directly in here,” he states.

Users can automate remediation efforts as well via pre-defined “playbooks”. Cisco plans to ship an initial set of playbooks with the product, and will also provide tools for creating them.

Intended primarily to unify oversight of Cisco’s own security solutions, including those in its Umbrella suite and Cisco Meraki product line, SecureX will also support systems from third-party security vendors. Those are likely to include some of the 175 members of Cisco’s Security Technology Alliance and draw on some of the 300 product-to-product integrations those companies have established with Cisco platforms to date, according to Munroe. A specific initial list of vendor products supported through SecureX upon release will be made public closer to the solution’s launch.

Cisco will provide SecureX at no additional cost to users of its software-as-a-service security tools. “If you’re buying a license from us and it’s a SaaS license, then this is included,” Munroe says. “It comes with the products that you already buy, so this is not something that is additional, in terms of either technology or expense.”

Though corporate IT departments with several dozen security products to juggle are the most obvious market for SecureX, according to Munroe, SMBs and the partners who serve them will benefit as well from the system, which is designed to be up and running in under 15 minutes.

“This is going to give you immediate value,” he says.

The need among customers and partners for a consolidated management product like SecureX has grown in recent years as Cisco’s security portfolio has expanded. The company bought Meraki, for example, in 2012 and OpenDNS three years later. More recently, it purchased multifactor authentication vendor Duo Security and Cloudlock, a maker of cloud access security broker software.

“We have a lot of products we’ve bought, we’ve built, we’ve acquired,” Munroe says. “Over the last three to four years we’ve given them integrations, but they still involve separate screens or separate UIs, so the customer still has that swivel chair problem of moving from one screen to the next.”

Obstacles and Opportunities for African Americans in IT
July 5th, 2022