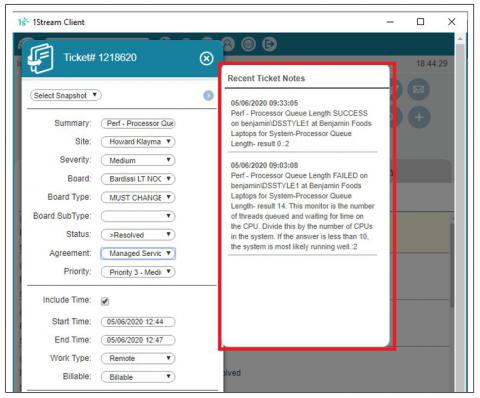 The latest enhancements to the unified communications vendor’s 1Stream platform seek both to make jumping into PSA records easier and to reduce the need for switching interfaces by importing more detailed information. By Rich Freeman
Tweet

Among the changes to 1Stream available now is a feature that lets users jump straight from 1Stream’s ticket editing screen into the corresponding record in an external PSA or CRM application. Giving people exit points from 1Stream into other systems like that is a central design principle for 1Stream, according to BVoIP CEO George Bardissi. “We don’t want people to feel like they’re locked in,” he says.

Another recent upgrade seeks to make moving from 1Stream to a PSA system while editing a ticket less necessary by importing and displaying detailed timeline and note information. “We want to make sure that all of those notes are right there, top of mind, when the calls are being answered,” Bardissi says.

A further addition to the ticket screen lets users of ConnectWise Manage and Datto’s Autotask PSA assign tickets to service agreements, both for reporting purposes and to help technicians confirm a caller’s eligibility for assistance they’re requesting.

A new feature in the 1Stream dashboard lets managers view data about forwarded calls with a single click. That’s useful information for companies that route incoming calls to an outside service desk, a third-party NOC, or an employee’s smartphone after hours and either want to see how many calls that involves or look up details about a particular forwarded call.

A new aggregated presence screen now available from the dashboard lets managers see whether specific users are on or off the phone and whether they’re logged in or out of a call queue. The same interface shows whether the user’s extension is set to available, busy, out of office, or another status. All of that information was available before, according to Bardissi, but in different places.

A change to 1Stream’s wallboard display feature automatically imports previously selected configuration settings whenever organizations restart the interface. New granular object and list functionality, meanwhile, lets organizations choose which PSA or CRM items—like boards, priorities, and billables—they wish to see in 1Stream. In the past, BVoIP’s support team fielded requests like that on a one-off basis for users. “Now they can go and do all that by themselves,” Bardissi says.

Hudu is the latest addition to the list of documentation platforms supported by 1Stream, which also includes ConnectWise’s ITBOOST solution and has included Kaseya’s IT Glue system since April. Support for Passportal will arrive within the next few weeks, according to Bardisi. “We’re just trying to make sure that we’re not missing any of the [products] that would be actively used,” he says.

Time for MSPs to Carry the Mantle of Leadership
END_OF_DOCUMENT_TOKEN_TO_BE_REPLACED