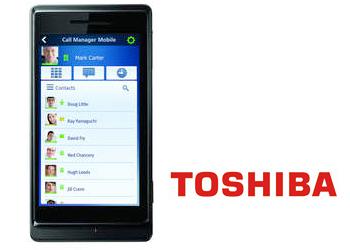 Call Manager Mobile for Android enables communications deployment of multiple OS platforms and integration with a variety of Web-based applications and utilities within a single interface. By Admin
Tweet

Toshiba America Information Systems Inc. rolled out its Call Manager Mobile for Android this week. The mobile application enables SMBs using Toshiba’s VIPedge to take calls and instant messages on Android mobile phones just as if they were at their desks.

Call Manager Mobile now provides XMPP-compatible server integration for enhanced presence state information, accessing Microsoft Exchange Calendar information among other sources. Each VIPedge customer gets his or her own XMPP server instance for an additional level of flexibility and security.