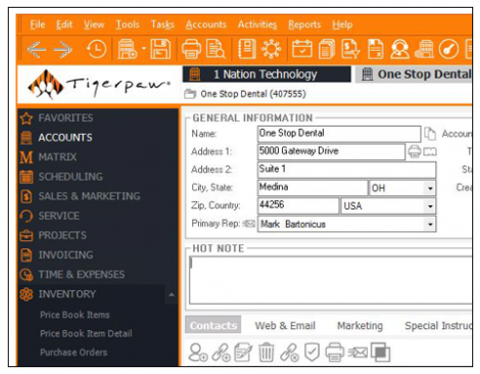 Expected to officially go into production late next month, version 18.1 of the vendor’s flagship PSA product employs a clean, web-friendly look and feel designed to make working in the system dramatically easier for technicians and service managers. By Rich Freeman
Tweet

Tigerpaw Software Inc. has unveiled a new edition of its PSA solution with a completely overhauled user interface.

Now in public beta testing, version 18.1 of the Bellevue, Neb.-based vendor’s flagship business automation system features the most significant user interface overhaul in Tigerpaw’s 34-year history, according to President and CEO James Foxall. The clean, web-friendly new look and feel is designed to make working in the system for long stretches dramatically easier for technicians and service managers.

“It’s not just a coat of paint,” Foxall says of the new UI. “It’s easier to use all day versus the existing product, which is more fatiguing with all of the colors and different metaphors.”

The revised design replaces “chiseled,” three-dimensional windows and icons reminiscent of Microsoft products from two decades ago with flat imagery and a simplified color palette that emphasizes white, grey, and orange. Large horizontal buttons, familiar to most users from browser-based software navigation schemes, have also replaced the system’s side grids and square buttons, contributing to easier readability.

“A lot of it is subtle,” says Foxall of the various UI changes, “but they make a big difference in using the product.”

“We used to be fairly consistent about UI updates, and it just seems to be something that kind of dropped to the side,” he says. Survey data indicated that the solution’s increasingly outdated appearance was a potential turnoff, and hence sales impediment, among millennial-aged buyers.

“There’s this whole new workforce that’s come into play, and we were just not what they wanted to see,” Foxall says. “The usability wasn’t there. The freshness wasn’t there.”

The new release also allows companies to divide sales commissions for complex deals involving more than sales rep. “We’ve had commissions in the past, but never to the point where we could split commissions across multiple people,” Foxall notes.

Foxall expects the public beta of Tigerpaw 18.1 to last until the third week of July. Many users will run the new system in their live environment before then though, he predicts, noting that the system is essentially production-ready now.

“We’re feeling really confident about where the product is today,” Foxalls states.

Fine-tuning interfaces for maximum ease of use and hence maximum technician productivity has been a point of emphasis among many leading makers of managed services software in recent years. ConnectWise began rolling out a new cross-solution UI for its suite of managed services products in November 2016. More recently, Autotask significantly updated the ticketing interface in its PSA solution in a bid to make information easier to find and help MSPs align their ticketing process more closely with service level agreement commitments.

Robin Robins: Reflections on the Eve of Annual Boot Camp

Jabra PanaCast Review - Get Your Huddle On
END_OF_DOCUMENT_TOKEN_TO_BE_REPLACED