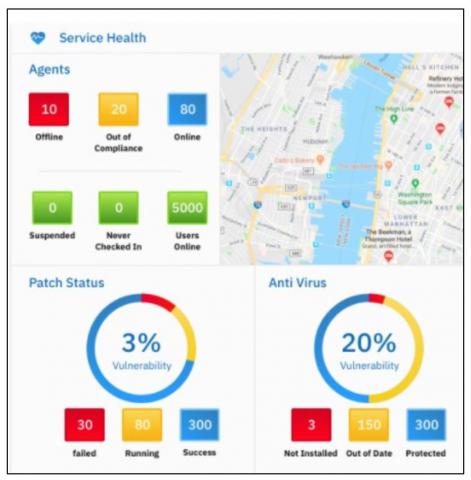 Called Kaseya One, the new system is designed to boost MSP productivity by providing centralized access to information from the software maker’s RMM, PSA, and other solutions as well as systems from third-party alliance partners. By Rich Freeman
Tweet

Kaseya Ltd. has introduced a centralized, integrated administrative interface for its own managed services solutions and select third-party products.

Called Kaseya One and due to reach market in the third quarter of the year, the new offering provides customized, role-based views of consolidated information from the software maker’s RMM, PSA, backup, and other products, as well as systems from alliance partners like IT Glue, of Vancouver, B.C.

The goal is to improve the productivity of an MSP’s service managers, technicians, and other employees by enabling them to view, investigate, and control everything they need to do their job in one place, rather than switch back and forth between discrete systems.

“Kaseya One is a fundamental reimagining of the way IT management is done,” says Frank Tisellano, vice president of product management and design at Kaseya, which maintains dual headquarters in Miami and New York. “We’re leveraging our deep longstanding relationships with third-party vendors like IT Glue to create a truly unified experience that doesn’t just encompass Kaseya software, but also goes into all the applications that our customers are using day to day.”

In March, Kaseya announced a source code-level integration agreement with IT Glue that essentially turned that company’s documentation application into a member of Kaseya’s IT Complete suite of managed services solutions.

At present, Kaseya One exchanges data only with solutions from a tightly controlled list of Kaseya partners. Those connections utilize APIs that are “built to be opened” though, according to Tisellano, who says that a wider list of outside vendors, including competitors ConnectWise and Datto Inc., will gain access to interfaces sometime in the second half of 2019, after Kaseya knows enough about the intricacies of connecting with external products to provide reliable, specific guidance to outside developers.

“We know our customers are going to have different needs, and we want anyone to be able to build their own idea of what a unified platform looks like by building apps on top of our platform,” Tisellano says. “Right now, we’re controlling which partners we integrate with.”

According to Tisellano, Kaseya One’s tie-ins with third-party solutions distinguish it from managed service control planes that unify only one vendor’s systems. The product’s ability to support customized, cross-solution workflows is its other chief differentiator, he adds.

“Because it’s a new, distinct platform it enables us to create new experiences and workflows that work the way IT service providers work, rather than asking them to tailor their workflows around the software that exists today,” Tisellano says.

Open integration with third-party solutions is a centerpiece of ConnectWise’s long-term ambition to create a platform MSPs can use to flexibly mix and match solutions from multiple providers as their wishes and business models dictate. ConnectWise officially launched Unite, a cloud management tool designed to serve as a centralized point of control for all the web-based systems technology service providers sell to their customers, last month.

ChannelPro Weekly Podcast: Episode #235 - Greetings from the New Hampshire Chamber of Commerce
8 Best Hacking Training Courses to Boost your IT Career
10 Things You May Have Missed at ChannelCon 2022
END_OF_DOCUMENT_TOKEN_TO_BE_REPLACED