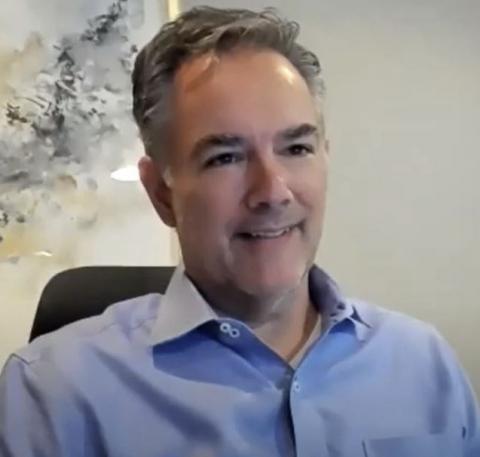 GreenLake, Hewlett Packard Enterprise’s as-a-service infrastructure and application platform, is the foundation of the vendor’s strategy for bringing the public cloud experience to private clouds, according to channel chief George Hope (pictured). By Rich Freeman
Tweet

Betting big on the cloud is a smart move for channel pros, Hewlett Packard Enterprise believes. Betting exclusively on the public cloud, the company believes, is less wise.

“70 percent of workloads aren’t in the public cloud, and it’s not for lack of trying,” says George Hope, HPE’s worldwide head of partner sales. “People just can’t push all the workloads into the cloud.”

They can and very much wish to extend the flexibility, scalability, and OPEX economics of public cloud computing to their on-premises applications though, continues Hope, who discussed similar themes on the most recent episode of the ChannelPro Weekly podcast.

“Cloud is an experience. It’s not a destination,” he says, quoting a favorite phrase coined by HPE chief executive officer and president Antonio Neri.

HPE GreenLake is the foundation of the company’s strategy for bringing that experience to workloads that don’t yet reside in environments like Amazon Web Services and Microsoft Azure, and possibly never will. The solution allows businesses to buy and pay for private cloud infrastructure and application capacity on an as-a-service basis using hardware located in their own data center, a co-located facility, or a remote site operated by HPE itself or one of its partners. The provisioning and management experience is designed to be identical regardless of which options users select.

HPE has been steadily adding software options to GreenLake since the platform’s debut in 2017, including Microsoft’s Azure Stack hyperconverged infrastructure system and SQL Server database two months ago. The company acquired Zerto for $374 million last month as well to add disaster recovery, ransomware protection, and data and application mobility capabilities to GreenLake.

A growing set of management tools for the platform have included a Data Services Cloud Console for administering storage since May and a Compute Cloud Console for compute management since June. GreenLake Lighthouse, an automated cloud service configuration system, debuted that same month.

Sales of GreenLake have been growing fast. Orders were up 41% year-over-year during HPE’s most recent fiscal quarter and annual recurring revenue was up 30%. According to Hope, moreover, the roughly 1,000 partners reselling GreenLake at present are responsible for an expanding portion of that success.

HPE has been gradually adding options for mid-market buyers and larger SMBs in recent years. Its core approach to the rest of the SMB spectrum revolves around the GreenLake Swift program, which offers standardized configurations through distributors, and Cloud28+, a community of cloud service providers that currently has more than 1,300 members in over 100 countries.

That strategy is in keeping with a broader policy to steer mid-market and SMB deals exclusively through partners that went into effect last year. “Partners often say, from my experience, that their margin is inversely proportional to our involvement,” Hope notes. “The more the vendor’s involved, the less the partner’s going to make. The more the partner leads it, the more the partner can make.” Turning mid-market and SMB into partner-led segments, he continues, gives channel pros the latitude to “control their own destiny.”