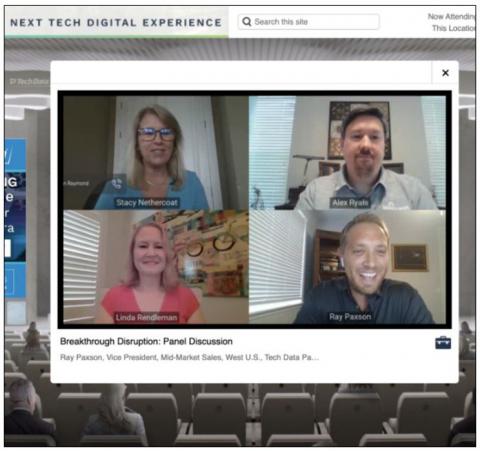 Speaking at the company’s Next Tech online partner conference this week, company executives cited mobile connectivity, tele-medicine, and cybersecurity as three examples of areas where opportunities for partners persist despite the coronavirus. By Rich Freeman
Tweet

Security is a big need among users of IoT solutions as well, according to Alex Ryals, vice president of security solutions for the Americas at Tech Data, who notes that attackers view IoT hardware as an easy way to penetrate corporate networks.

“Devices like security cameras or thermostats or temperature sensors, those types of things, typically don’t have a reasonable way to patch and update on a regular basis, so it’s easier to find a vulnerability and know it’s going to be there for a long period of time,” said Ryals during a Next Tech conference presentation.

Threats to other technologies are on the rise this year as well, he noted, thanks in part to the massive number of people working from home—often on personal devices and over insecure networks—instead of the office at present. “COVID-19 has brought in almost a 400% increase in cyber activity from hackers,” Ryals said. “Some of the threat intelligence we’re seeing is kind of scary.”

Endpoint protection software and VPNs are a must under those conditions, he added, as are email security systems. “Almost 90% of malware is deployed through phishing email scams,” observed Ryals, who cited end user security training products as a potent additional defense against phishing.

Assembling an elite portfolio of security solutions is an ongoing quest for Tech Data, according to Ryals. “There’s over 2,000 security vendors in the market. We have about 44 of them, so we’re very intentional and picky about who we partner up with,” he said, Ryals’s group currently does over a billion dollars a year in sales through those 44 companies.

Hosting partner conferences online, as distributors Ingram Micro and D&H have also done in recent days, is one way Tech Data is protecting partners and vendors from COVID-19, according to Marty Bauerlein, the company’s senior vice president of North American sales. Bauerlein shared updates during the conference on measures aimed at keeping employees safe too.

“We still have our global work from home policy in place right now,” he said, adding that the company will begin letting people back into the office shortly. “It’s going to be very slow, gradual, and methodical, and for the time being, probably starting in July on, it’s going to be voluntary.” If all goes well, Bauerlein added, operations will be “close to normal” by September.