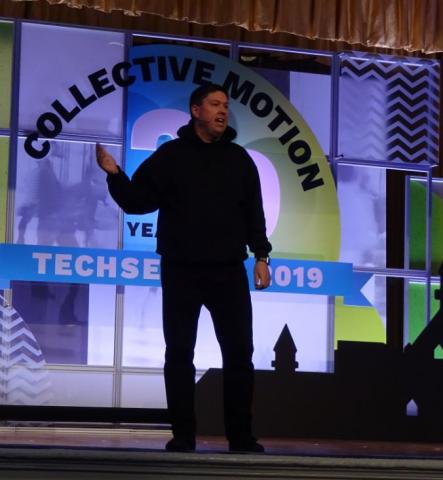 IT security isn’t your problem and it isn’t your distributor’s either. It’s everyone’s problem, according to Alex Ryals, vice president of security solutions for the Americas at Tech Data Corp.

“Tech Data and our partner community both have a shared responsibility when it comes to fighting cybercrime,” said Ryals today during a keynote at the spring 2019 meeting of Tech Data’s TechSelect partner group, in San Diego.

The IT landscape, he noted, is growing more and more crowded with threat vectors all the time. There will be some 300 billion potentially vulnerable passwords in use by 2021, for example, and some 200 billion IoT objects in operation by 2020. There are 1.2 billion websites in production today, moreover.

“That’s a hacker’s dream,” Ryals said, noting that an attacker who successfully compromises just 0.01 percent of those sites stands to make piles of money. In all, he continued, the total financial impact of cybercrime will total $6 trillion annually by 2021.

SMBs are helpless to stop that onslaught too. “Most people are not prepared to defend themselves,” Ryals said. “If we don’t leverage the power, scale, and size of the channel to help customers be successful in securing themselves, who’s going to do it?”

Meeting that obligation will require efforts from both the biggest IT industry giants and the humblest channel partners, said Ryals, who went on to list some of the security investments Tech Data has made recently or has planned for the future.

Those include the RECON Security Suite, a collection of subscription-priced services from lesser-known but noteworthy vendors that Tech Data rolled out last June. In a bid to find more such companies, Ryals is about to hire a full-time security vendor recruiter whose sole job will be searching through the roughly 700 companies offering cyber-protection hardware, software, and services for the ones worth promoting.

“Our goal with recruitment is to bring you consistently a set of vendors that solve business problems for your customers in all areas of security,” Ryals says. “It’s a lot of work to figure out who’s a me-too player and who’s a unique player.”

Tech Data launched a vendor incubation program last quarter to help those unique players get their products to market more quickly. “[It’s] a way that we can take these small vendors and incubate and help them, so they’re ready to work with you,” Ryals says.

He’s also staffing up a new Phoenix-based security sales team that will include prospecting specialists, technical presales professionals, and more. “We are hiring more people to assist you guys in knowing how to sell security to your customers,” Ryals says.

On the way as well is a new “cyber range” in Phoenix where partners will be able to study security best practices. Due to open this August or September, the new facility will provide incident response simulation training, for example, aimed at teaching channel pros how to design and deliver post-breach remediation services to their customers.

ChannelPro Weekly Podcast: Episode #165 - Getting Together to Avoid Each Other