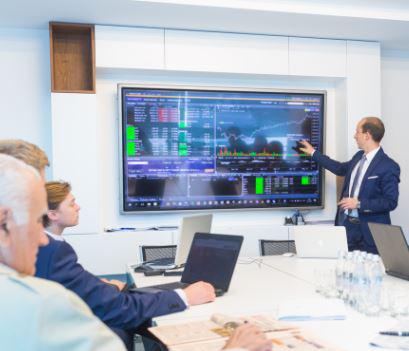 The distributor says it’s “doubling down” on pre-packaged digital signage and collaboration solutions in particular, in a bid to help newcomers to pro AV get in on what’s set to be a $229 billion market by 2023. By Rich Freeman
Tweet

Though they require specialized skills that many channel pros lack, digital signage, conference room systems, and other audio-visual solutions are all swiftly expanding markets among SMB resellers for distributor SYNNEX Corp. at present.

That’s according to Sandi Stambaugh, vice president of the VISUALSolv group and device mobility, who spoke with ChannelPro this week at the spring 2019 meeting of SYNNEX’s Varnex partner community in Greenville, S.C. Revenue for VISUALSolv, which covers the pro AV market, she reports, grew 40 percent in 2018.

“It’s a significant portion of the opportunity, and it’s one of the fastest growing,” Stambaugh says. “We doubled our SMB business last year.”

Global outlays on pro AV solutions will climb to $229 billion by 2023, according to analyst figures cited by SYNNEX officials at the Varnex conference. All of that spending has the company pursuing pro AV sales, which have been a priority for more than a dozen years, with increased determination.

“It’s pretty established,” says Stambaugh of SYNNEX’s pro AV practice, “but it’s a very quickly growing space.” Credit for that growth belongs to escalating demand within the education, healthcare, and retail verticals, among others, along with the proliferation of simple, affordable, IP-based solutions in signage, collaboration, and related markets. Such offerings are bringing pro AV revenues within reach of many channel pros for the first time.

“The opportunity is expanding for them,” Stambaugh says, who notes that SYNNEX offers a wide variety of pre-packaged bundles designed to make seizing that opportunity simpler. Some in the digital signage segment, she continues, combine displays, mounts, and media players with software that makes creating content akin to building a PowerPoint presentation.

“It can be that simple,” Stambaugh states. “Just out of the box, throw up some content, and you’re done.” Comparable bundles exist for conferencing solutions. “You order this display, this projector, this screen, and this audio solution for a meeting space this size,” Stambaugh says.

Signage and collaboration, according to Stambaugh, are two of the hottest subsets of the pro AV market. “Those are really the two areas where we’re doubling down and expecting great things,” she says.

All of that excitement has gotten the attention of MNJ Technologies, a solution provider, SYNNEX partner, and Varnex member based in Buffalo Grove, Ill. “We don’t know a ton about [pro AV], but they seem to be doing very well with it,” says Ben Niernberg, the company’s senior vice president of sales and services. MNJ is currently contemplating the introduction of a pro AV practice as a result. The success of that venture is likely to hinge on how well the company designs solutions and content, Niernberg observes. MNJ doesn’t possess those skills, he continues, but can outsource them to SYNNEX.

“SYNNEX offers that for you as one of their value-adds,” Niernberg notes, “so for us there would be no learning curve.”