SYNNEX Says 2019 Will Be About Solutions, Services, and Cloud for SMBs 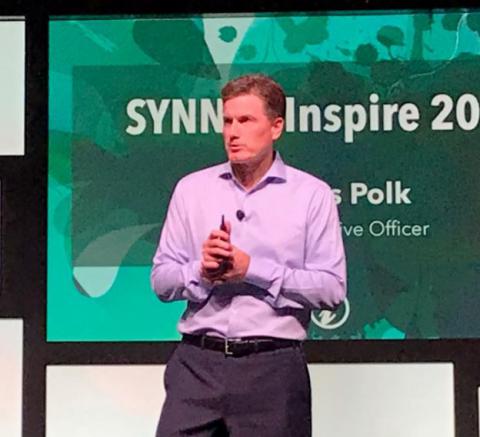 Speaking at its annual Inspire partner event, CEO Dennis Polk (pictured) said that capitalizing on the distributor’s acquisition of Westcon-Comstor Americas will be a priority in the year ahead as well. By Rich Freeman
Tweet

SYNNEX Corp. plans to put some of the cash its double-digit growth is presently generating for it into new solutions, services, and resources for its reseller partners.

Most of those investments will be dedicated to the SMB portion of SYNNEX’s business, according to Dennis Polk, the Fremont, Calif.-based distributor’s CEO. Polk spoke this morning at the 2018 edition of the SYNNEX Inspire partner event, which is currently taking place in Greenville, S.C.

“SMB is always going to be our focus,” Polk said.

Within the U.S. specifically, meanwhile, SMB revenue is up 32 percent to date in the current fiscal year, according to John Phillips, SYNNEX’s vice president of U.S. SMB sales, who expects the year-end figure to be roughly the same.

“I don’t see us dipping below there,” he says, adding that much of that growth is coming from net new accounts. “We’re vigilant on signing up new business,” he says. To support that effort, Phillips continues, SYNNEX will expand its U.S. SMB salesforce by approximately 25 to 30 percent in the coming 12 months.

All told, according to Polk, SYNNEX has grown revenue by close to 10 percent annually on average over the last decade. “We make money year in and year out, and the important thing about that is we invest that money back in the business,” he said this morning.

Solutions and services, Polk continued, will be one of the company’s focus areas for investment in 2019. That means resellers can expect to see more offerings like TrackingForLess, the bundled solution introduced earlier this year (and previewed for ChannelPro in March) that combines GPS devices and mobile connectivity with custom-coded software to help truckers and other logistics businesses keep tabs on critical assets.

SYNNEX has several other such pre-engineered products nearly ready for release and many more in the development pipeline, according to Rob Moyer, vice president for cloud services, mobility, and IoT at SYNNEX. Among them, he continues, will be a cloud-hosted solution designed to convert an ordinary television into the core hardware component of an affordable digital signage solution.

“Turning a TV into a smart edge device and then tying it back to Google or Microsoft is so much more cost efficient than the old way, where it was a custom app built and then put onto some sort of [local] infrastructure,” Moyer says.

Equipped with specially-developed content management software and accompanied by optional outsourced assistance with installation and data analytics, among other functions, the forthcoming solution will sell for approximately $20 to $30 a month per television. Resellers can earn recurring revenue managing the system, and don’t need to acquire in-depth signage expertise before selling it.

That’s the model generally for all of SYNNEX’s solutions, which are designed to make entering new markets easier for resellers by pre-assembling piece parts into easily adopted products, according to Vice President of Mobility and Connected Solutions Tim Acker. Traditionally, he notes, distributors have forced partners to turn hardware and software components into customer-ready solutions themselves.

Jabra PanaCast Review - Get Your Huddle On
END_OF_DOCUMENT_TOKEN_TO_BE_REPLACED