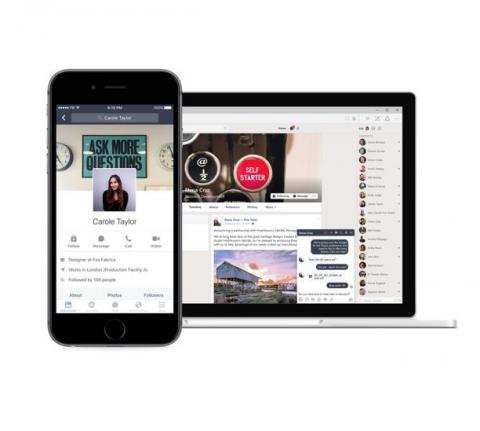 Workplace by Facebook, as it’s officially known, is an ad-free, commercial version of Facebook’s consumer platform. Though it resembles both Slack and Microsoft Teams, SYNNEX calls it a complement rather than potential replacement for those products. By Rich Freeman
Tweet

SYNNEX has signed an agreement with Facebook to become the first U.S. distributor of the social media company’s Workplace by Facebook collaboration solution.

Word of the pact, which was announced during SYNNEX’s 2019 Catalyst event in Los Angeles, arrived on the same day the company changed the name of its CloudSolv marketplace and community to Stellr.

Introduced in 2016, Workplace by Facebook is a commercial, advertising-free version of Facebook’s consumer platform complete with a news feed, live video streaming, and instant messaging. It’s designed to serve as a “private social media” solution for businesses looking for new and more effective ways to keep employees connected, according to Rob Moyer, senior vice president of cloud services, mobility, and IoT at SYNNEX.

“It’s a way for people to communicate and spread information virally and efficiently within a target audience,” he says.

A mobile-first solution optimized for use on smartphones and tablets, Moyer continues, Workplace generally requires no end user training, as it utilizes the familiar Facebook interface.

“We feel there’s going to be strong demand,” he says.

Workplace comes with many of the same features as popular collaboration tools like Slack and Microsoft Teams, including project and team workspaces; voice and video calling; and file, photo, and video storage. Moyer considers it a complement to those other solutions with unique strengths, however, rather than a potential replacement. “This is like a new space,” he says.

The system offers a wide array of integrations with third-party solutions, including Box, Dropbox, Google Drive, and Microsoft OneDrive, as well as Salesforce, HubSpot, Cisco Webex, and Zoom. “The ability to share information quickly regardless of which tools you use is a bonus,” Moyer says of Workplace. “That’s one of the things we like about it.”

SYNNEX plans to make Workplace available for ordering on May 20th, and will not disclose pricing until then. “It’s very reasonably priced relative to what you’re getting,” Moyer states, adding that the system leaves resellers plenty of room for profit. “There is healthy margin,” he says.

Users can buy Workplace directly from Facebook at present in both a free edition with limited functionality and a premium edition priced at $3 per user per month.

According to Moyer, SYNNEX will initially offer Workplace only through a limited set of resellers with especially strong interest in the product. “We’re really looking for people that are interested in building a business around it,” he says. That business, he notes, can layer incremental revenue for implementation, customization, and ongoing management services on top of recurring license fees.

Facebook’s decision to partner with SYNNEX is its first step toward creating a channel for Workplace. “They have a lot of demand from end users,” Moyer says, and need partners to meet it all.

There is currently no partner program for Workplace. Moyer, however, expects that to change in the future. “We wouldn’t have announced this or launched it if we didn’t have confidence in their ability to launch a formal program,” he says.