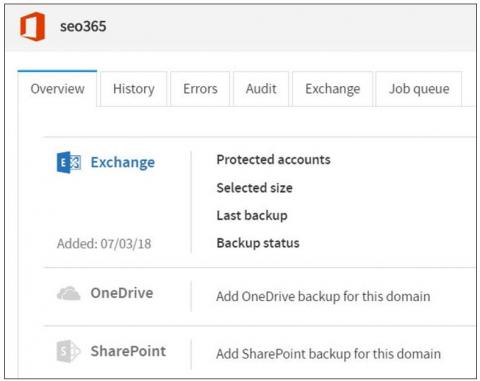 An addition to the vendor’s existing backup solution for workstations, servers, and business documents, the new system offers unlimited protection for data in Exchange Online, OneDrive, and SharePoint for a flat $1.50 per user per month. By Rich Freeman
Tweet

Available now, the new feature lets businesses and their managed service providers protect data in Exchange Online, OneDrive, and SharePoint from ransomware, corruption, accidental deletion, and other dangers. It joins previous support in SolarWinds Backup for business documents as well as complete workstation, physical server, and virtual server images. Administrators can manage all of that data through a single interface.

“The technicians don’t have to switch interfaces, have different credentials, or look in two places to troubleshoot issues or recover files,” says Alex Quilter, vice president of product management for security at SolarWinds MSP. “That’s one of the things that our MSPs love about us is that we are a platform you can standardize all of your backup and recovery needs on without having to deploy multiple technologies in your environments and your end customer’s environment.”

Technicians can access the SolarWinds Backup interface either through a standalone management system or from within the company’s N-central RMM solution.

SolarWinds stores protected data in its own network of roughly 30 cloud data centers around the world. The company’s “data location promise” guarantees businesses that want backups to reside in a particular country that their data won’t cross international borders without their permission.

“We honor that data location so that you can be sure that your backup data remains in the country of choice that you had when you initially set up the customer,” Quilter says.

Pricing for the solution runs at a flat $1.50 per user per month for unlimited capacity. “You don’t have to ever worry about counting gigs or worrying if you’re going to have enough storage,” Quilter says. The workstation and server components of SolarWinds Backup continue to employ a per-device pricing model as before.

At present, SolarWinds RMM, the online counterpart to N-central, which is an on-premises application, utilizes a separate online BDR solution of its own to protect documents, workstations, and servers. SolarWinds plans to replace that system with SolarWinds Backup, including Backup for Office 365, next year.

According to Quilter, future editions of Backup for 365 are likely to support Microsoft Teams and Office 365 Groups. Support for Google’s G Suite is under consideration as well. “We have had requests for G Suite,” Quilter says. “I wouldn’t be surprised if we eventually cover it.”

That Quilter oversees SolarWinds Backup in addition to the company’s threat monitoring and other security services is no coincidence. Like a growing number of vendors, SolarWinds views BDR as an essential element in layered security strategies.