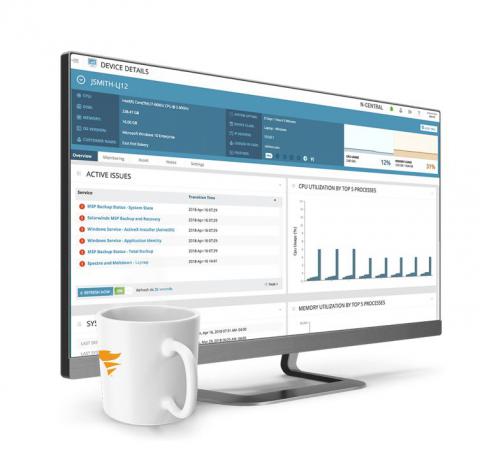 SolarWinds MSP has shipped a new release of N-central, its on-premises RMM platform, with new support for network topology mapping and data encryption, as well as enhanced automation and patch management functionality.

The network topology feature, which is the first of its kind in the solution, lets technicians automatically assemble a visual representation of a customer’s infrastructure. Built-in troubleshooting capabilities enable users to spot connectivity issues faster and with less effort.

Also new, N-central’s Disk Encryption Manager component supplements Microsoft’s BitLocker technology with features for establishing encryption rules, applying them to multiple devices at once, and monitoring encryption status. Reporting functionality allows users to demonstrate encryption compliance to customers and view the last known encryption state of a device that has been lost or stolen.

An updated version of N-central’s Automation Manager, which lets users streamline frequently performed tasks without writing scripts, now automates workflows and activities in VMware environments. The solution’s patch management module, meanwhile, now utilizes its own engine, rather than rely on the main N-central engine. The result, according to SolarWinds, is greater responsiveness to the rapid changes commonly associated with third-party applications.

Other new features in the product include support for the Catalina edition of Apple’s macOS and the ability to automatically discover the OS version, model number, and serial number of networking hardware from Zyxel and Juniper.

“As an MSP grows, its IT environments become more complex and the requirements evolve. This is why our partners’ feedback is pivotal to the way we develop our products,” said Mav Turner, group vice president of products for SolarWinds MSP, in a press statement. “After listening to our N-central partners, we got to work on enhancing the solution based on what they need to make their jobs easier. The new features integrated within our N-central platform give users clear visibility of their customers’ networks, enhance automation capabilities, and provide additional layers of protection to help keep their networks secure and their customer data safe—even if that data falls into the wrong hands.”

N-central is one of two RMM products from SolarWinds MSP. The other, called SolarWinds RMM, offers similar functionality but is completely hosted in the cloud.

The addition of disk encryption to N-central is the latest of several recent moves by SolarWinds MSP aimed at reinforcing its portfolio’s security capabilities. Other significant steps taken this year include the acquisition of password management vendor Passportal in April and the release of a new endpoint detection and response solution based on technology from SentinelOne.

ChannelPro 5 Minute Roundup for the Week of September 19th, 2022
MSP Business Builder Finds Self Through Tech; Success With CompTIA
MSP Valuation: What’s Your MSP Worth?
END_OF_DOCUMENT_TOKEN_TO_BE_REPLACED