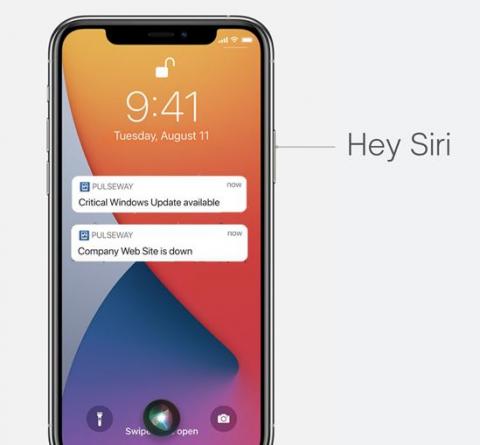 Using the new capability, technicians who run Pulseway’s mobile app on an iPhone or iPad can restart servers, power off workstations, run scripts, apply patches, and more using only their voice. By Rich Freeman
Tweet

Using the new capability, which is available now, technicians who run Pulseway software on an iPhone or iPad can restart servers, power off workstations, run scripts, apply patches, and more using only their voice.

The feature is designed to keep users who are driving a car or otherwise roaming productive when “you need to take an action but you can’t physically reach out and hold your phone in your hand, then fiddle with the application, find the computer, find the right command, and submit that command,” says Marius Mihalec, Pulseway’s CEO.

Users can apply voice commands to individual devices or defined groups of them. Siri asks for confirmation that it heard the user’s instructions accurately before carrying them out. “We make sure that the right command gets executed every time,” Mihalec says.

The company plans to expand the list of shortcuts Siri recognizes over time. “We’re going to add even more commands in the future based on user requests and a few things that we have on our list as well,” Mihalec says.

Pulseway’s software has been optimized for mobile and cloud-based users since its earliest release. 56% of users employ the vendor’s mobile apps for iOS and Android as their primary management interface. Those apps had 27,000 users as of last December.

Voice commands are the latest addition to the Pulseway portfolio, which in addition to RMM software includes PSA and backup systems. Other enhancements introduced in recent months include the ability to display customized dashboards showing alerts, device status, and other information on a smartphone’s home screen. That feature builds on the web dashboards Pulseway introduced last December.

An April update to Pulseway’s recently launched network management software performs discovery scans faster and includes enhanced functionality for identifying connectivity issues during deployment. The company is currently working on a future edition of the system capable of identifying virtualized environments running on hypervisors from VMware and Microsoft, as well as the individual virtual machines in those environments.

Pulseway is also introducing a re-tooled engine for its remote control solution that is 3x faster than its predecessor, according to Mihalec. “Before, it was a feature that we could say, ‘yes, we are happy with it,’” notes Mihalec. “We want to make it a feature that we are very proud of, and I think we’re on our way.”

The new system allows users to transfer files between devices using the Windows clipboard as well. It has been available to early access users for about a month, and is rolling out in production to Pulseway’s entire partner base now. A similarly faster engine for the MacOS remote control functionality Pulseway shipped last year is set to arrive soon.