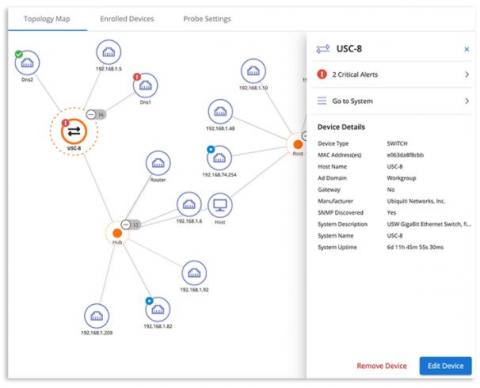 The add-on to the managed services software maker’s RMM platform allows users to discover, monitor, and remotely manage almost any device with an IP address. By Rich Freeman
Tweet

Pulseway has added network monitoring to its suite of business solutions for managed service providers.

An add-on to the company’s RMM system, the new tool allows users to discover, monitor, and remotely manage almost any device with an IP address, including routers, switches, firewalls, load balancers, wireless LAN controllers, printers, and storage arrays. Using the system, named Pulseway Network Monitoring and officially available since yesterday, will give MSPs a more comprehensive understanding of customer infrastructures and accelerate their ability to identify and fix technical issues, according to Marius Mihalec, Pulseway’s CEO.

“It extends their ability to respond fast to any outages that their customers encounter, and that’s not limited anymore to just servers and critical workstations,” he says. “It’s everything to do with devices inside their customers’ IT environment.”

Users can capitalize on that speed boost and differentiate themselves from other MSPs by building shorter response times into their SLAs, adds Andy Ellwood, Pulseway’s product marketing manager.

“All MSPs are in a very competitive market,” he notes. “Anything that can help them prove that they’re better and faster and quicker than the competition is a benefit to them.”

The discovery component of Pulseway Network Monitoring automatically collects an IP address and MAC address from every device on a customer’s network and arranges devices on a topology map. Technicians can then enroll devices for monitoring and management via Pulseway’s RMM web interface and mobile app.

They can also remote into network devices through the web or mobile app using SSH or telnet. “You can issue commands from anywhere in the world without having to open a port from the device to the internet,” Mihalec notes.

Users can run ping, port, and SNMP checks on enrolled hardware, and configure the system to issue alerts under specified conditions, such as a new device joining the network, an existing one dropping off, or a port opening up unexpectedly.

Utilizing the automated workflow technology that Pulseway rolled out in April, MSPs can also trigger pre-defined responses to alerts. For example, technicians can create workflows that automatically notify clients when toner is running low in a printer or that automatically reboot a device whose performance has dropped below a minimum threshold.

The solution relies on an expanding list of known devices to characterize the hardware it finds. At present, that catalog includes most of the standard products an MSP is likely to encounter, according to Mihalec, and some of the smart bulbs, thermostats, and other internet of things devices increasingly connected to SMB networks as well. Pulseway continually trains the solution to recognize additional devices.

Licenses for the network monitoring tool sell for $99 per month for all of its discovery functionality plus monitoring and management of up to 20 devices. Users can add coverage for more devices at the same tiered, volume-based monthly rate Pulseway charges them for each workstation they manage through the RMM system. Discovered devices that aren’t enrolled for management don’t count against a subscriber’s total allotment.

A 2.0 release of Pulseway Network Monitoring, due within the next month, will include additional automation workflow capabilities, support for reusable monitoring and management templates, and other new features.

ChannelPro 5 Minute Roundup for the Week of April 5th, 2021
END_OF_DOCUMENT_TOKEN_TO_BE_REPLACED

Jabra PanaCast Review - Get Your Huddle On
END_OF_DOCUMENT_TOKEN_TO_BE_REPLACED