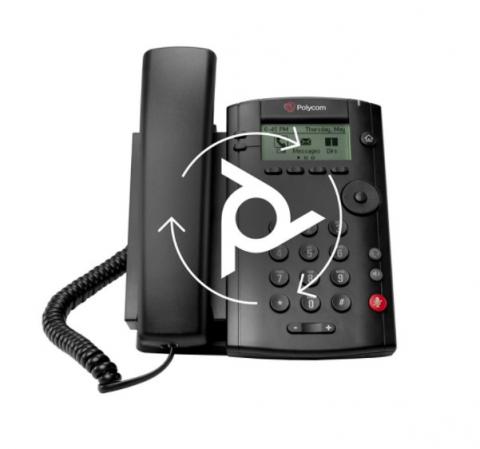 A program called Renew grants vouchers to businesses looking to exchange select Poly desk phones for newer gear. The goal is to help employers meet demand for the latest phones, headsets, and cameras among remote workers returning to the office. By Rich Freeman
Tweet

Poly is running an upgrade program designed to help users of older desk phones switch to newer equipment as employees return to the office.

Called Poly Renew and in effect through next March, the program awards vouchers to businesses that return working Poly VVX and CCX phones through a Poly reseller. Companies can then use the funds to buy replacement phones, headsets, and video cameras.

The goal is to help companies meet the heightened expectations of home-based employees who consider old-school desk phones a poor substitute for the late-model videoconferencing gear they used when offices were closed due to the coronavirus pandemic, according to Nick Tidd, Poly’s vice president of global channel sales.

“They want the same, if not a better, experience than they had working from home,” he says.

A tight labor market has employers paying increased attention to demands like that, Tidd continues, as does resistance among some workers to spending all or part of their week at newly reopened offices. “They’re saying, ‘I’m far more productive at home,’” he says.

Vouchers distributed through Renew range from $10 per phone for VVX 101 units to $60 per phone for models like the VVX 601 and CCX 700. “We have several million phones in the North American market that are eligible for return,” Tidd says.

Participants in the program must submit at least 25 devices. There’s no upper limit to how many phones they exchange.

Poly will refurbish returned phones that are fit for reuse and recycle the rest. “It keeps product out of landfills,” Tidd observes, adding that harvesting chips from recycled devices will help Poly cope with ongoing global shortages.

The company is contemplating an expansion of the program that would let businesses exchange aging headsets and cameras too. “I would like to see us move beyond our desktop phones,” Tidd says.

Businesses that wish to participate in Renew must do so through a Poly reseller. “Poly is a channel-centric company, and we’ll continue to be that,” Tidd says, adding that Renew offers partners a chance to drive hardware sales and contribute to corporate sustainability campaigns while helping customers modernize their workplace. “There’s no incremental cost for them to offer this program, and it gives them another conversation point with their respective end users.”

Poly is seeing strong demand at present for high-definition cameras and noise-cancelling headsets, especially at offices with open floor plans. Sound bars and other hardware suited for huddle rooms and “touchdown” spaces are popular as well. Users want all of those devices, Tidd notes, equipped to attach to local networks automatically via Bluetooth wherever they go.

“What they’re looking for is when I step into the office or when I step into my home office, it just connects and syncs up,” he says, adding that the ability to switch seamlessly between Zoom, Teams, and other communications platforms is important as well.

The chip shortage plaguing many hardware makers is delaying orders on select Poly products as well, according to Tidd, who says the company has been switching from ocean transportation to air freight where possible and avoiding especially backlogged ports to mitigate the issue. Poly has also reduced the variety of chips it needs in inventory.