Not Dead Yet: Tech Data Sees Plenty of Upside in Endpoints 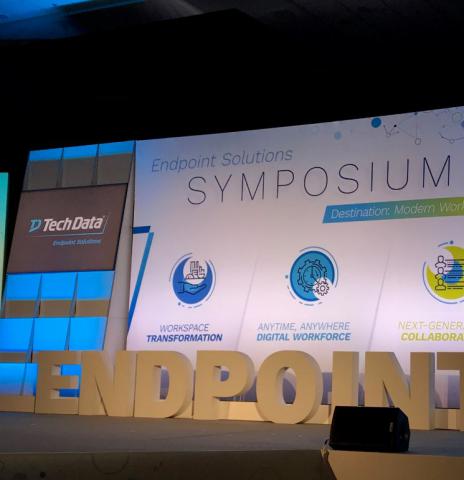 Contrary to popular belief, the distributor says, partners can make big money on collaboration, digital signage, and a wide range of other solutions that combine endpoints with software and services to meet pressing customer needs. By Rich Freeman
Tweet

Don’t believe the nay-sayers, warns Tech Data Corp. There’s still plenty of money to be made on endpoints provided you know what to sell and how to sell it.

It’s a message the distributor has been hammering home at its 2019 Endpoint Symposium, which is currently underway in Westminster, Colo. Though cloud computing, the Internet of Things, and other next-generation technologies are huge opportunities, speakers at the show insist, you still need hardware to process and consume all the data they produce.

“It’s not yet just being beamed into our heads,” said Linda Rendleman, senior vice president of endpoint solutions for the Americas, in a keynote presentation yesterday. “A device has to be used in order to compute or to visualize, and that’s the endpoint space.”

IDC expects shipments of traditional PCs and tablets to decline 3.3 percent this year. According to Rendleman and other symposium presenters, however, partners who build such products into solutions alongside conferencing hardware, digital signage displays, virtual reality headsets, and other devices—plus accompanying software and services—can pocket plenty of income nonetheless.

Indeed, endpoint-related sales accounted for some 65 to 70 percent of the $37.2 billion in top-line revenue Tech Data recorded during its 2018 fiscal year, according to Marc McClure, the company’s senior vice president for U.S. field sales.

Helping partners accustomed to reselling shrink-wrapped products become solution providers instead is a big part of Tech Data’s strategy for successfully navigating the IT industry’s transition from client-server computing to an era dominated by “3rd platform” markets like IoT and analytics. In that emerging age of technology, “pick, pack, and ship” services of the kind that long defined Tech Data are no longer as needed or profitable as they once were.

“The new Tech Data no longer wants to be known as a bank and a barn,” said Neil Stafford, director of eastern region commercial field sales for Tech Data, in a presentation this morning. “Distribution as you’ve known it has changed.”

Old school VARs must change too, Tech Data believes, and events like the symposium are part of the company’s ongoing efforts to show them how. In the endpoint segment, that means focusing on complete solutions to pressing business problems in three especially promising areas: workspace transformation, workforce mobility, and next-generation collaboration.

All three markets, according to Rendleman, require skillfully assembled combinations of hardware, software, and services. “End customers are looking for something that’s hard to solve with just one vendor,” she says.

As exotic as all that can sound to legacy VARs, Rendleman continues, it’s often a natural fit. “If they’re focused on infrastructure and thinking about how [the customer] is set up within their business, thinking about their conference rooms and how they’re collaborating between offices is a very natural conversation to extend there,” she says.

Jabra PanaCast Review - Get Your Huddle On
END_OF_DOCUMENT_TOKEN_TO_BE_REPLACED