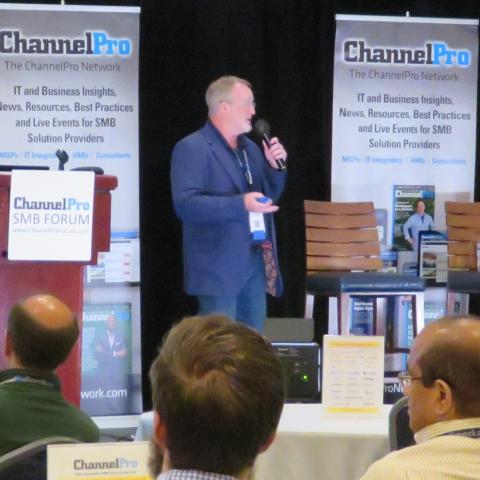 At last week’s ChannelPro SMB Forum New England, we had the chance to catch up with Untangle, Nodeware, and GreenLink Networks. From a Linux agent to a web app firewall to in-person training, and more, here’s what’s new and upcoming:

Since joining GreenLink Networks in April, Channel Manager Larry Meador (pictured) has been busy seeking input from partners on how the channel-only provider of business VoIP services can better serve its MSP partners. Improved service and support were their top priorities, and GreenLink has responded by adding 14 new staff members to the service and partner support teams and creaing a partner success team. Later this month it will launch the first of a series of in-person trainings for partners.

Channel pros have been telling GreenLink, “’You've got good service, but we just need more of you because you've grown so quickly,’” Meador explains. “And so that's exactly what we've done. When these partners spoke, I went back to ... the founders and said, here's what we need to focus on. And the beautiful thing is they've supported me 110%. So that's just kind of indicative of what we're trying to do. We're just trying to support the partners better. We're trying to support their customers better as well.”

Meador will also be hitting the road in October for 1:1 executive business reviews with partners, another first. The goal? “To sit down with the partners and just kind of recap their business and what we're doing, and then see how we can collaborate together to grow their business and their Greenleaf business as well.”

Since taking over the helm as CEO of Untangle four years ago, Scott Devens has been overseeing the buildout of a roadmap that he says positions the company as the “RMM for security.” Untangle rolled out Command Center, a cloud-based console for managing networks with multiple locations, three years ago, and has since added an SD-WAN router and in late June announced threat prevention capability for that router, with web filtering coming in late November, Devens says. Up next for Untangle's integrated suite of software and appliances is a web application firewall, which is in beta now and expected to be available in December.

“We're trying to build out basically what I call security RMM for that whole security platform,” he says. “It’s all been focused around MSPs and helping MSPs.” Devens says the cloud-based Command Center “opened the door” for its channel business. “Our MSPs can run that single pane of glass and manage the whole security profile of their customer base from one location.” He adds that Untangle has been building out its channel sales team as well.

Barracuda Networks has been pursuing a similar effort to position its RMM solution as a security-focused option since purchasing that product from Avast two years ago.

Looking ahead, Devens says Untangle will continue to add features and functionality to Command Center and is also looking to partner in the backup and recovery area.

Microsoft Channel Chief to Unhappy NCE Newcomers: “We Are Listening”
Where to Catch Sherweb In Person in 2022
Canadian Tech Predictions for 2022: From Collaboration to Virtual Desktops
END_OF_DOCUMENT_TOKEN_TO_BE_REPLACED

LG Gram for Business 17 (2020): Big Reasons to Like It
END_OF_DOCUMENT_TOKEN_TO_BE_REPLACED