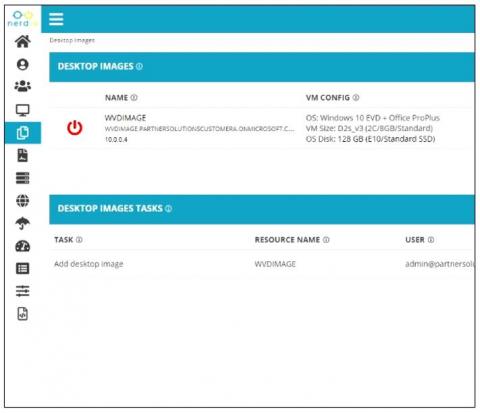 Unlike Nerdio for Azure, moreover, Nerdio Manager for MSP is not hosted on Nerdio’s own Azure resources. “This is an Azure application that’s installed from the Azure Marketplace into a partner’s own Azure subscription,” Vladimirskiy explains. “It runs completely independently of every other MSP, so each MSP has sort of their own version that they fully control, and they decide where it installs, and where it resides, and who has access to the data.” That’s an appealing feature, he adds, for MSPs with security or regulatory compliance concerns.

Nerdio Manager for MSP is heavily based on Nerdio Manager for WVD, which reached market last March. That product was designed for large businesses with in-house IT departments looking for a management tool they could easily deploy on top of an existing Azure infrastructure. The new system takes that same functionality and adds features managed service providers need, such as multitenancy and white labelling.

According to Vladimirskiy, Nerdio Manager for WVD currently has over 1,000 users. “If you’d asked me a year ago when we were planning our launch of the Nerdio Manager for WVD product where I expected to be in a year from now, I don’t think we would have predicted anything of this magnitude,” he says. COVID-19 and the stay-at-home orders it inspired are a big reason for that momentum.

“There is no choice for a lot of companies to give their employees the ability to get to applications and be able to be productive remotely, so WVD has gained a tremendous amount of traction certainly in the enterprise and to a large extent in SMB,” Vladimirskiy says. “A lot of MSPs are focusing on it much more than they were certainly a year and a half ago and even a year ago.” Partially as a result, he continues, Nerdio has more than 1,000 MSP partners at present.

Microsoft has seen adoption of WVD accelerate in the past year as well.

“Every [desktop as a service] solution we’ve had before Windows Virtual Desktop has either come up short in the experience for the user or has been a big financial burden for the customer. Windows Virtual Desktop is neither. It’s a great experience at a great cost, and it drives a ton of Azure revenue,” said Gavriella Schuster, corporate vice president of Microsoft’s One Commercial Partner organization, in a NerdioCon appearance yesterday. “It went from zero to 60 overnight.”

The work-from-home explosion continues to drive rapid growth in Microsoft’s cloud business generally. Commercial revenue for Office 365 grew 21% in the company’s second fiscal quarter, according to fiscal results announced yesterday. Azure revenue was up 50% in the quarter.

“This pandemic has helped a lot of businesses really rethink what business are they in, and how do they want to run their company, and what does that look like in the future?” Schuster said yesterday. “It’s really turned them on to technology.”

Per comments shared with ChannelPro late last year, Schuster sees room for further growth in the cloud despite all of the purchasing activity in the last year, noting that Microsoft believes no more than 5% of businesses globally have moved to the cloud so far.