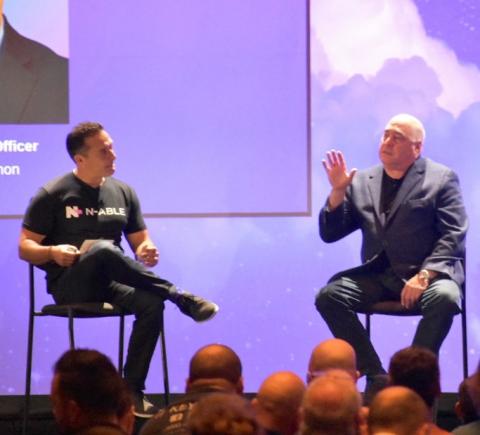 And they do mean everything. John Pagliuca and Mike Cullen (pictured left and right, respectively) are two of many at at N-able who believe that managing the cloud and managing hardware aren’t either/or propositions for MSPs. By Rich Freeman
Tweet

The theme of this week’s N-able Empower partner conference in Las Vegas was “own the cloud,” and the managed services vendor went out of its way to tell MSPs in attendance that it’s ready, willing, and able to help them manage the cloud applications and infrastructure their clients increasingly rely on.

“When it comes to the cloud, we’re all in,” says Mike Cullen, N-able’s general manager of RMM.

But make no mistake, unlike analysts and others who see hardware as increasingly irrelevant commodities, N-able doesn’t view cloud management as something MSPs must do instead of device and network management. It views managing the cloud as something its partners must do in addition to those more traditional chores.

“For us, it’s not going to be good enough to either manage the physical endpoints and the network or the cloud,” said N-able CEO John Pagliuca today in a conversation with ChannelPro, adding that the same goes for MSPs.

As N-able sees it, that entire ecosystem, now and into the foreseeable future, absolutely includes hardware.

That analysis is reflected in the core tenets of N-able’s product strategy, which Pagliuca describes as “managing everything and securing everything,” and Cullen describes as end user (as opposed to endpoint) management.

“Whatever it takes for an end user to be able to compute, we want to be there to manage the other end of it,” he says.

Critically, N-able aspires to do that management, of everything from workstations and servers to Azure instances and Microsoft 365 tenants, through a single set of tools: N-central, the on-premises RMM solution for bigger users with more complex needs, and N-sight, the cloud-based RMM system introduced in July for smaller environments.

Cloud Asset Manager, the forthcoming cloud infrastructure management offering that N-able previewed this week, epitomizes that approach. When it arrives early next year, the new system will be an embedded component of N-central and N-sight rather than a stand-alone alternative to them.

It will also, along with the Microsoft 365 management system that N-able shipped in August, be an early, foundational part of a growing suite of cloud-focused modules. Without discussing specifics in detail, Pagliuca suggested that N-able partners can expect to see richer cloud cost management software (beyond the functionality included in Cloud Asset Manager) and a cloud security solution that will help MSPs with configuration and permissions management, and generate alerts when it spots anomalous activity.