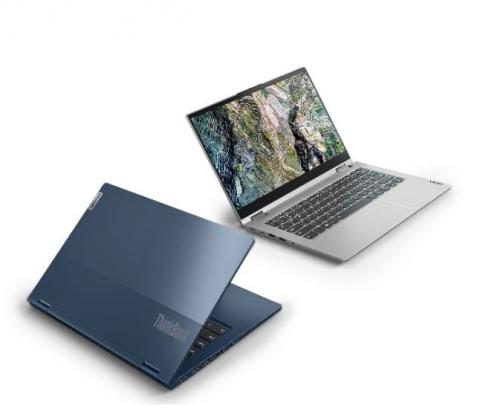 New additions to the SMB-focused ThinkBook portfolio include the first device with a 360-degree display (pictured). The 27-inch monitor features a 1080p camera, integrated speakers, and dual noise-cancelling microphones. By Rich Freeman
Tweet

Lenovo has introduced six additions to its ThinkBook line of stylish but affordable notebooks for SMBs, including the portfolio’s first 2-in-1.

The new devices, as well as a monitor optimized for hybrid in-office and at-home work models, were announced on the same day as Lenovo’s first foldable PC, the lightest member of its X1 laptop family, and a new subscription-priced device monitoring service.

The 2-in-1, called the ThinkBook 14s Yoga i, features a fold-back hinged display and comes with a smart pen with standby mode functionality that automatically opens a note-taking app when removed from its storage slot. Equipped with 11th Gen Intel Core processors as well as Thunderbolt 4 and USB-C ports, it’s available in mineral gray or a limited edition “Abyss Blue” version.

ThinkBook 14s Yoga i devices are expected to ship in November for $879 and up.

The larger clamshell ThinkBook 15 Gen 2 i comes with optional integrated wireless earbuds offering dual mics and environmental noise cancellation. The earbuds charge automatically when placed in their storage cradle inside the laptop, and connect to laptop audio automatically when removed for use.

Configurations are available with one hard-disk drive and one solid-state drive or dual SSDs. The ThinkBook 15 Gen 2 i is slated to reach market next month, starting at $569.

The smallest of the new ThinkBooks, the ThinkBook 13 Gen 2 i, comes with a 13.3-inch display boasting the same widescreen 16:10 aspect ratio found on the new X1 Nano, along with a Thunderbolt 4 port and optional PCIe Gen 4 storage. It’s scheduled to become available next month, and will be priced from $829.

Further additions to the ThinkBook line unveiled today include a variety of 13-inch, 14-inch, and 15-inch models bearing Intel or AMD processors at price points ranging from $549 for 14-inch and 15-inch AMD units to $939 for the ThinkBook 15p i, a high- performance laptop with NVIDIA GTX 1650Ti graphics and a X-Rite Pantone certified display.

Lenovo first announced the ThinkBook portfolio in May of last year. Its combination of design flair, durability, and economical pricing won Lenovo a spot on ChannelPro’s list of All-Star award winners for 2019.

The new display, officially dubbed the ThinkVision T27hv-20, is a 27-inch unit with an adjustable 1080p IRRGB camera, integrated speakers, and two noise cancelling microphones. Equipped with single-cable USB-C connectivity to data, video, and Ethernet, it comes with an ergonomic lift, tilt, pivot, and swivel stand as well. The device is set to ship in December for $549 and up.

Sophos Says Attackers are Ganging Up on Victims
END_OF_DOCUMENT_TOKEN_TO_BE_REPLACED