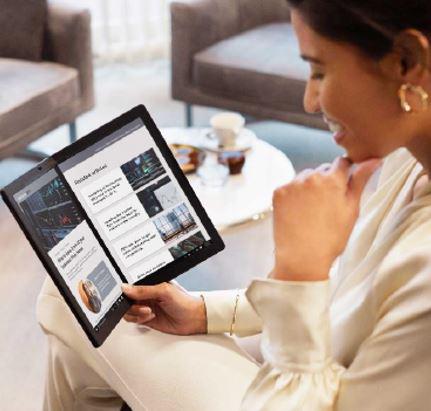 Lenovo has introduced two additions to its X1 line of premium PCs, including a split-screen foldable device and a sub-2 lbs. laptop, as well as a subscription-priced remote monitoring and proactive analytics service.

The new offerings appeared on the same day as an array of SMB-focused ThinkBook devices, including that portfolio’s first 2-in-1.

Called the ThinkPad X1 Fold, the foldable PC is essentially a 13.3-inch, hinge-less, “paper-thin” OLED display that users can lay flat, hold like a book, or prop up like a conventional laptop. Powered by an Intel Core i5 processor, the device comes with optional accessories that include a magnetically attachable Bluetooth keyboard, a battery-operated stylus, headphones, and a portable mouse with built-in laser pointer.

The result is an industry first, according to Tom Butler, executive director of Lenovo’s commercial portfolio. “We see the X1 Fold as really the launch of an all new category,” he says.

Indeed, a blog post on the new product published today by Jerry Paradise, vice president of the commercial portfolio in Lenovo’s PC and Smart Devices Group, emphasizes that the X1 Fold is not a laptop but rather “the chameleon of personal computing devices.”

“Fold it into a book and scan your social media posts. LinkedIn on the left side and Twitter on the right, or simply relax and read the latest blockbuster novel. But then an email comes in from the boss. She wants to review the quarterly sales tracker presentation. Quickly turn X1 Fold into laptop format (but remember, it’s not a laptop!) and connect to the video conference on the upper half of the display, while you review the presentation on the lower half. Use the pen to make those all-important annotations,” Paradise writes.

Though not officially a limited-edition product, the X1 Fold will not be sold in large quantities. “It’s a concept that illustrates the future of computing and offers a window to the potential that such a category can fulfil,” Paradise states.

Scheduled to ship in a few weeks at prices starting from $2,499, the X1 Fold is available for pre-ordering immediately.

The ThinkPad X1 Nano, also unveiled today, weighs in at just 1.99 lbs., making it the lightest ThinkPad ever built.

“We’ve really optimized this for mobility and portability,” Butler says. “Whether you’re working at home, on the go, in the office, or moving about throughout, it’s going to give you an extremely optimized performance experience and durability that you would expect with all of our devices.”

The first ThinkPad based on Intel’s Evo platform, the unit features a 13-inch 2K display with an unusual 16:10 aspect ratio. “It’s the same height as a 14-inch, 16:9 screen,” Butler notes. “It effectively gives you a working 14-inch screen in this very light, very small 13-inch body.”

ChannelPro 5 Minute Roundup for the Week of May 23rd, 2022
END_OF_DOCUMENT_TOKEN_TO_BE_REPLACED