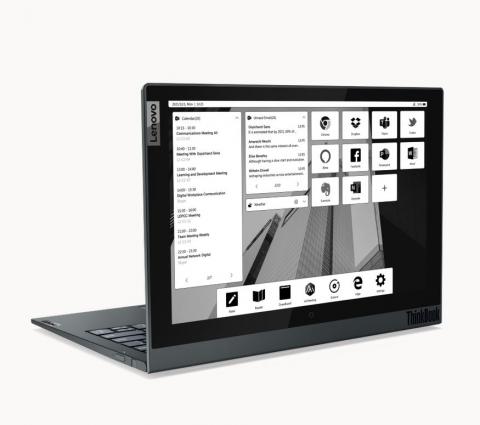 They include a refreshed edition of the 13-inch ThinkBook Plus Gen 2 i (pictured) with an expanded exterior e-ink display, plus features like Dolby Vision HDR and Dolby Atmos for improved online conferencing. By Rich Freeman
Tweet

Lenovo has updated its ThinkBook line of SMB notebooks with new and expanded models featuring thinner designs and enhanced support for mobile collaboration.

Introduced a day after multiple additions to the ThinkPad laptop family, the new devices were unveiled during this year’s virtual CES conference.

A refreshed edition of the 13-inch ThinkBook Plus Gen 2 i announced today features an expanded e-ink display with a 68% screen-to-body ratio, versus 48% in the earlier model, resulting in 12 inches of usable space. A redesigned interface aims to provide more flexible options for running productivity software without opening the unit’s cover. The exterior display also boasts a faster refresh rate than its predecessor and the same 2560 x 1600 screen resolution as its interior counterpart.

That interior display, formatted in a 16:10 ratio, has a nearly 90% screen-to-body ratio, in contrast to 78% previously, and is designed to ease eye strain by reducing blue light emissions.

Like many of the ThinkPads showcased yesterday, the new ThinkBook Plus Gen 2 i comes with Dolby Vision HDR and Dolby Atmos technology for improved video and audio during online conferencing, as well as support for Wi-Fi 6.

13.9 mm in height, the unit weighs in just under 2.9 lbs. The case includes space for a garaged digital pen that can launch select applications automatically. The improved battery, Lenovo says, provides up to 15 hours of power, or up to 24 when only the e-ink display is used. An optional ThinkBook Charging Mat is now available as well.

The ThinkBook Plus Gen 2 i will ship this quarter with a $1,549 starting price.

“If you’re doing a lot of design or drawing, you’re taking a lot of notes maybe in class, or you’re on the go, that would be the right device for you,” says Rob Cato, vice president of North American channel for Lenovo’s Intelligent Devices Group.

A new addition to the ThinkBook portfolio, the ThinkBook 13x i, is 12.9 mm thin and weighs slightly more than 2.6 lbs. It too has Dolby Vision, Dolby Atmos, and Wi-Fi 6 compatibility. It will arrive in Q1 at prices that start at $1,199.

To enhance videoconferencing, the units both come with AI-based noise cancellation technology designed to reduce background sounds. Users can also switch among Private mode for personal conferencing, Shared mode for group calling, or Environmental mode when they wish sounds from other devices to be audible.

The 14-inch ThinkBook 14p Gen 2 is 16.9mm in height and weighs just over 3 lbs. It can be configured with up to a 2.8K OLED display with VESA DisplayHDR True Black standard. The 16-inch ThinkBook 16p Gen 2 comes with a 2560 x 1600 display, available in a pre-calibrated configuration that’s X-Rite Pantone certified, plus optional NVIDIA GeForce RTX graphics.