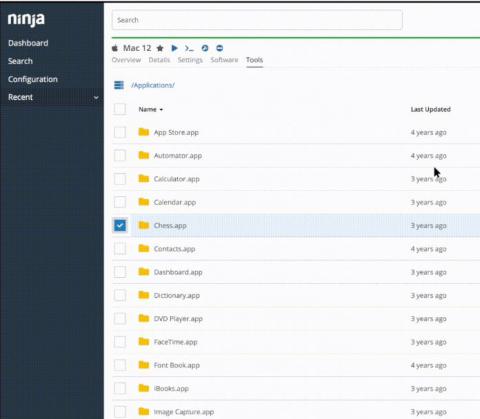 Included as well in version 4.5, which arrives in the U.S. next week, is an option to require permission from end users before initiating remote control sessions on Windows devices and a new quick access “favorites bar” for devices, groups, and customers. By Rich Freeman
Tweet

NinjaRMM has added patching and remote management functionality for devices running the MacOS operating system to its RMM platform.

The new features are key elements of the product’s version 4.5 release, which debuted this week. It is available overseas now and will arrive in the U.S. on February 5th.

Technicians using the updated edition of NinjaRMM will be able to download and install MacOS updates through the same interface they employ to patch Windows devices. They will also have the ability to manage live tasks on Apple endpoints and to access a Mac device’s file explorer remotely. Additional administration tools for MacOS are on the roadmap for future NinjaRMM releases, the company says.

Included as well in version 4.5 are six new reports that list devices added or removed by customer location, software inventory by customer, software installations and removals, critical events on Windows endpoints, tasks performed for each of an organization’s devices, and notes logged in the system by end user and device. A new custom report feature also lets users adjust the contents of reports to their needs and preferences.

In a bid to strengthen security, Ninja has added an option to require permission from end users before initiating remote control sessions on Windows devices through the TeamViewer remote access system. Similar functionality is in development for Mac devices.

Those new safeguard arrives amid a mounting wave of attacks on RMM systems by hackers hunting for login credentials and other critical data, and follows a change implemented roughly six months ago that made utilizing two-factor authentication mandatory. Other RMM vendors, including Datto and Pulseway, now require multifactor authentication as well.

Also new in NinjaRMM 4.5 are a “favorites bar” that lets users pin specific devices, groups, and organizations to the top of their console for easy access and an enhanced global search tool that utilizes fuzzy logic to find and display information faster.

Ninja labels all of the enhancements in version 4.5 “quality of life improvements” designed to boost technician productivity. Further augmenting usability, the company says, is a priority for upcoming releases this year.

Last month, Ninja reported that its partner base grew nearly 100% in 2019 to 4,000. The company now has 170 employees worldwide, and increased its engineering staff specifically by 60% last year.

Jabra PanaCast Review - Get Your Huddle On
END_OF_DOCUMENT_TOKEN_TO_BE_REPLACED