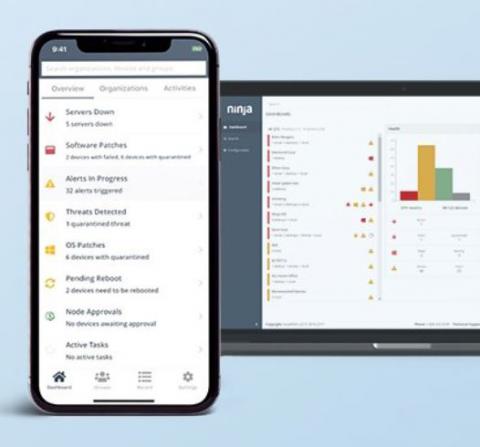 NinjaRMM has shipped version 4.3 of its remote monitoring and management solution, as well as the vendor’s first-ever mobile app.

Notable additions to the platform in the new release include VMware monitoring functionality. Announced during the same week as VMware’s annual VMworld conference in San Francisco, that feature includes performance monitoring, alerting, and policy configuration capabilities.

Also in the new release is an expanded patch management module that lets technicians roll out Windows feature and driver updates automatically.

“NinjaRMM has already been ranked #1 when it comes to patch management capabilities,” said Vice President of Product AJ Singh in a press statement, “but these Windows feature and driver updates raise the bar even more. Ninja’s OS patching will make it even easier for MSP’s to ensure their end users’ machines are always securely up to date.”

NinjaRMM’s new mobile app, called NinjaRMM Mobile, lets users support customers while away from their desks. Key features in the app include access to the NinjaRMM Task Manager, as well as remote access tools like Cloud RDP and Splashtop. It is currently available in an iOS version only.

“MSPs are routinely out on the road visiting clients or partners, but what happens if there’s an emergency?” asks Sal Sferlazza, NinjaRMM’s CEO, in prepared remarks. “Now our partners have visibility, access, and control on the go. They can respond to real-time alerts and quickly jump into the NinjaRMM app to investigate and remediate right from their phone.”

According to Sferlazza, NinjaRMM plans launch major new releases every 45 to 60 days going forward. “We are constantly building and enhancing the features we know MSPs actually need,” he said in a media statement. “But we are also innovating, and building new features MSPs never knew they needed. We want to keep our partners ahead of the technology curve."

ICYMI: Our Channel News Roundup for the Week of August 3rd
Selling Cybersecurity Virtually In The New Normal
END_OF_DOCUMENT_TOKEN_TO_BE_REPLACED