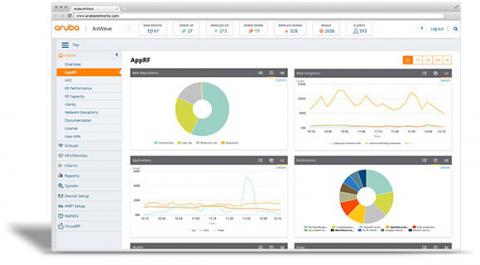 The new products and procurement options include “as-a-service” payment options and a cloud-based managed services administration tool for solutions from the vendor’s Aruba networking unit. By Rich Freeman
Tweet

The announcements were made in conjunction with HPE’s Global Partner Conference, currently taking place in Boston.

“The platform is designed to extract lots of context from the wireless, wired, and wide-area network and share that context with those services in real time,” says Ozer Dondurmacioglu, senior director of product and solutions marketing at Aruba. “It’s also designed to consume context from third-party services and program the network in real time.”

Dondurmacioglu cites a guest Wi-Fi onboarding solution from San Francisco-based ISV Envoy as an example of the latter capability. Envoy’s solution helps people visiting a customer, partner, or supplier request access to the local network. The Mobile First Platform enables the system to create and configure temporary accounts based on the input those users provide.

Also unveiled today were new procurement models for Aruba solutions, including a “Network as a Service” offering that lets customers change networking from a capital investment into an operating expense by purchasing consulting, design, and deployment services from system integrators on a monthly subscription basis.

Though targeted chiefly at large enterprises, the new offering includes a component for SMBs that buy networking services from AT&T.

“In North America, if you’re a small to medium enterprise customer and you’re already working with AT&T, you can add Wi-Fi, wired, and wide-area network VPN services to your monthly bill with a single click, and receive the relevant hardware on site and do your payments on a monthly basis,” Dondurmacioglu says. Aruba is currently negotiating similar arrangements with additional carriers, and expects to complete those alliances in 2017.

According to Dondurmacioglu, the addition of subscription-based pricing to Aruba’s product line comes in response to rising demand for that option from both end users and partners. Businesses moving more and more of their IT into the cloud want to pay for networking the same way they increasingly pay for infrastructure and applications. Partners, meanwhile, covet the predictable revenue streams that “as-a-service” offerings deliver.

The new tool, which is Aruba’s first specifically for MSPs, will allow end users to assign management responsibilities for Aruba solutions to third-party IT providers, who will have consolidated access to all of their customers’ systems through one interface. Customers will pay for those solutions via upfront payments rather than subscription fees, but partners can bill their services on the same monthly invoices they already distribute.

HPE purchased Aruba last March, in a transaction valued at $2.7 billion. According to Dondurmacioglu, today’s announcements prove that the transition to new ownership has been a smooth one for the company.

“Our innovation engine is operating at full speed,” he says.

New Additions to Hyper Converged 380 and Flexible Capacity
Aruba’s new offerings were among several that HPE showcased at its partner conference today. The company also revealed that it will be adding new options to the line of Hyper Converged 380 products it launched last year. Those systems, which bundle HPE ProLiant DL 380 Servers, VMware virtualization software, and HPE management tools with support and startup services, are designed to help partners order complete virtualization and cloud computing environments in five clicks or less.

Changes are also coming to HPE’s Flexible Capacity offering, which lets customers pay for on-premises infrastructure via the same scalable consumption-based fees that public cloud operators charge. First, members of HPE’s Partner Ready partner program who qualify for Flexible Capacity will be authorized to deliver installation and hardware repair services. In addition, HPE will widen the range of virtual machine sizing and pricing options in Flexible Capacity to accommodate any requirements its partners and customers define, and add support for application containers based on software from market leader Docker Inc., of San Francisco.

To make financing solutions like those introduced today simpler, HPE also announced that its financial services unit is adding a plug-and-play API that partners can embed in online marketplaces. Called Partner Connection, the new interface enables buyers to research and select HPE financing programs on a self-serve basis.

HPE’s product and procurement updates arrive on the same day as a series of changes to its Partner Ready channel program, as well as partner program and multifunction printer news from HP Inc., which is conducting its own Global Partner Conference at the same Boston location as HPE at present.

Jabra PanaCast Review - Get Your Huddle On
END_OF_DOCUMENT_TOKEN_TO_BE_REPLACED