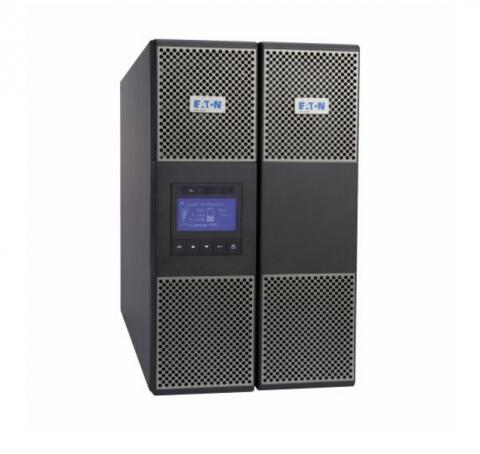 The new devices, which are the company’s first online double-conversion lithium-ion products, are smaller and lighter than units with lead acid batteries and have a longer lifespan, Eaton says, resulting in lower TCO despite higher upfront costs. By Rich Freeman
Tweet

The new devices, previewed last fall, are the company’s first online double-conversion UPSes bearing lithium-ion cells and the first such products anywhere in the industry, according to Eaton. They’re only the second lithium-ion UPS of any kind from Eaton, following the 5P models the company began shipping early in 2019.

Like all UPS products with lithium-ion batteries, the new 9PX SKUs are lighter than units with valve-regulated lead acid (VRLA) batteries and more compact. They also require significantly less maintenance, because Li-ion battery packs can go eight to 10 years on average between replacement cycles, versus the two to four years typical with VRLA cells.

“We’re going to see a lifetime on the lithium battery probably two to three times that of the lead acid,” says Sami Hussaini, product manager for Eaton’s UPS 9 series. The end result, he continues, can be savings for end users despite the fact that lithium-ion UPSes like the new 9PX units have a dramatically higher price tag than lead acid equivalents.

“With some of these models, you’re going to have a TCO message where for the lifespan of the UPS you’re paying less, even taking into consideration that initial capital expenditure,” Hussaini says. “The decreased operating expenses in that lithium-ion UPS kind of bring it either in line or right under the lead acid.”

Eaton expects the lithium-ion 9PX to be popular with healthcare, education, and other “light industrial” buyers eager to avoid the costs of dispatching technicians to widely dispersed locations every few years to install new batteries. Edge computing environments where space is at a premium will be an even stronger use case for the new products, according to Hussaini, who calls edge computing one of the hottest segments of the power quality market at present.

“We’re seeing this grow more and more,” he says.

Reservations about the higher cost of lithium-ion UPSes are receding as well, he adds.  “Not everyone’s going to adapt the lithium-ion UPS at this point, but we think there’s a healthy appetite out there for this.”

Even customers who aren’t ready to deploy lithium-ion batteries yet but know they will be eventually have questions about the technology these days, Hussaini continues, and appreciate knowing that Eaton makes lithium-ion products. “I think it gives a leg up for our partners,” he says. “It’s a hot topic and we’re first to market, so it’s pretty exciting.”

Questions about fire safety, though less common now than when lithium-ion UPSes first started arriving, still come up in sales meetings, Hussaini adds. Eaton’s response is that its lithium-ion products are as safe as lead acid units thanks to an advanced battery management system designed to prevent issues like “thermal runaway.”

Additionally, he notes, Eaton’s batteries use lithium-ion phosphate, which is a less volatile material than the lithium cobalt dioxide and lithium manganese oxide often found in Li-ion cells. “Our engineering teams did a lot of due diligence, a lot of work, to understand what needs to be used and how do we do it to make sure there are no issues.”