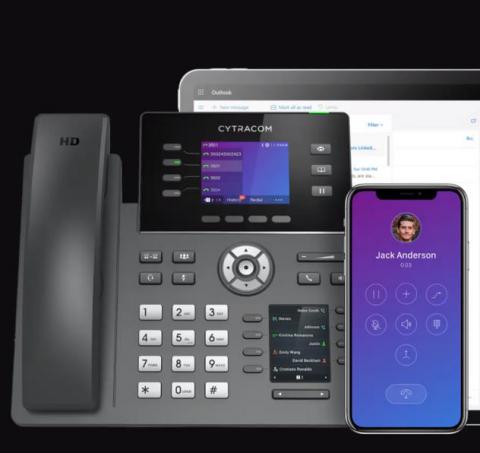 Cytracom has introduced a major series of additions to its VoIP solution for MSPs that significantly expand the platform’s capabilities.

The new mobile app, which is available now, replaces the third-party system Cytracom offered its customers previously. Unlike that earlier product, the new one provides access to presence information, visual voicemail, call history logs, and more in addition to the ability to make and receive calls.

The new app requires no technician configuration either after a user downloads it, according to Cytracom CEO Zane Conkle. “As long as you know your login ID and your password, you’re on the system,” he says. “We’re saving the partners just tons and tons of time.”

The desktop tool features the same appearance as the mobile app and provides the same functionality. The two systems are integrated with one another and the rest of the Cytracom platform as well. “If you make a call on mobile, it shows up on desktop. If you make a call on desktop, it shows up on mobile,” Conkle says. “They’re very tightly linked.”

The new Office 365 functionality, which mirrors capabilities available in the mobile and desktop apps and is similarly integrated with the Cytracom platform’s other components, is designed to provide an additional option for utilizing VoIP features. “Outlook and Office 365 is an interface that our users have up all day, 24/7, on their computer screen,” Conkle notes. Building VoIP functionality directly into that interface allows end users to place calls, message co-workers, and more without switching to another application.

Office 365 integration becomes available on May 15th. Cytracom plans to add more integrations with software-as-a-service products in the future, according to Conkle, who says that Salesforce and HubSpot are both early candidates.

The SMS messaging introduced today, which will reach users this summer, allows MSPs to communicate with customers who prefer texting to email or phone calls without handing out a personal cell phone number. “It’s going to allow our clients to engage with their customers in a totally new way that they really haven’t been able to do before,” Conkle says.

Cytracom’s first custom-built desk phone, called the D2 and available now, succeeds the Grandstream GXP2130 units the company utilized before. Like the previous device, the new one is included free with most subscription plans. The device includes 24 programmable keys, versus the GXP2130’s eight, optional Wi-Fi connectivity, and a digital user directory with real-time presence information.

The Road to Success Is Paved with Service
END_OF_DOCUMENT_TOKEN_TO_BE_REPLACED

Jabra PanaCast Review - Get Your Huddle On
END_OF_DOCUMENT_TOKEN_TO_BE_REPLACED