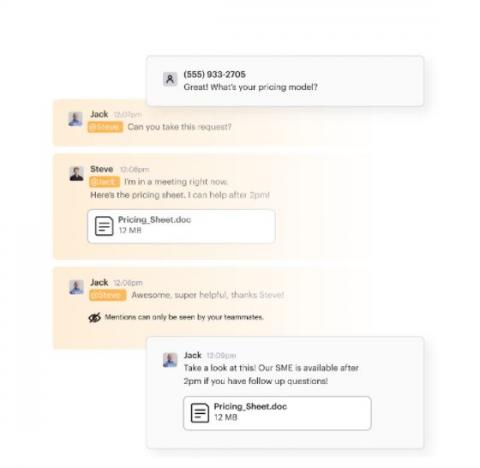 Cytracom has added business team texting to its unified communications-as-a-service platform for MSPs.

Called “shared inboxes,” the new feature expands on business messaging functionality introduced in 2019 by allowing multiple users to exchange texts with customers on behalf of their employer using a company phone number instead of their own. It comes in response to feedback from MSPs whose clients wish to present a unified “business persona” to consumers rather than communicate solely via individual phone lines, according to Cytracom CEO Zane Conkle.

“A lot of the demand is actually coming from business owners who say, ‘we don’t want our employees engaging with customers on their personal cell phone numbers. We want to be able to keep a unified front in all business and company conversations,’” he says.

Using the new feature, customer service staff can share an inbox attached to the company’s support line while salespeople text with potential buyers collectively on another line. MSPs, meanwhile, can use shared inboxes themselves to let technicians text assistance to clients via a help desk phone number instead of their cell phones.

People assigned to an inbox receive messages simultaneously via the same desktop and mobile interfaces they use for individual business texting. They can then prioritize messages, coordinate a reply in private texts that customers don’t see, and monitor the thread’s progress.

According to Conkle, such functionality hasn’t been available in UCaaS solutions until now. “There are a handful of other providers that are in very niche markets that offer something similar,” he says. “It’s essentially kind of like a contact center solution, but very complicated.”

As before, business text messaging remains an included component of Cytracom’s premium C2 plan. Shared inboxes are available as an add-on at per box per month rates.

Once a handy bonus communication channel, texts are increasingly the primary way customers want to interact with businesses. “It’s really a key component of how we communicate today,” Conkle says. “Users have moved to the point that they prefer text messages as opposed to email or calling.” Shared inboxes give people that option even if the only contact information they have about a company is a phone number on its website.

Business messaging’s popularity with both MSPs and end users has exceeded Cytracom’s expectations since its launch roughly 18 months ago. “Nearly every customer that comes onboard with us is picking up business text messaging in one form or another,” Conkle says.

The feature has gained functionality beyond shared inboxes since its debut as well. Initially supported only by Cytracom’s desktop application, business messaging has since become available through the mobile app as well. The vendor has also added the ability to send not only images via texts but PowerPoints, .PDFs, and other files as well. Both capabilities, Conkle notes, are missing in UCaaS solutions that limit users to SMS messages only.

Global sales of public cloud UCaaS solutions rose 21.2% last year to $16.4 billion, according to IDC, thanks in part to COVID-19 and the urgent demand it created for scalable, flexible, cloud-based communication tools.

For Cytracom, John Tippett Is More Than Just a New COO
June 30th, 2021

ChannelPro 5 Minute Roundup for the Week of October 18th, 2021
END_OF_DOCUMENT_TOKEN_TO_BE_REPLACED

LG Gram for Business 17 (2020): Big Reasons to Like It
END_OF_DOCUMENT_TOKEN_TO_BE_REPLACED