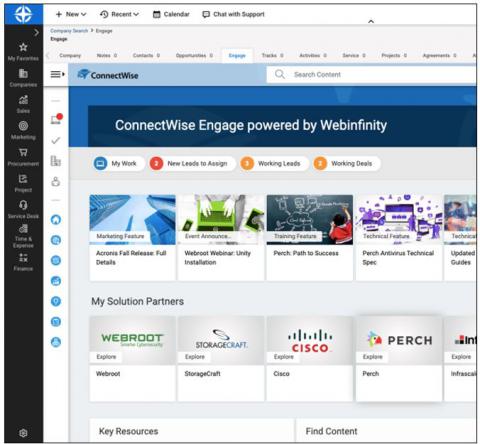 Named ConnectWise Engage and powered by technology from PRM vendor Webinfinity, the new system is the latest expression of ConnectWise’s ambition to offer single-pane-of-glass access to all of the tools and resources MSPs need to serve customers. By Rich Freeman
Tweet

ConnectWise has signed a strategic agreement with Webinfinity to add a partner relationship management solution to its growing portfolio of solutions and services for MSPs.

The company announced the agreement at its IT Nation Connect event, currently underway in Orlando, on the same day it disclosed its acquisition of master MSP Continuum and documentation vendor ITBOOST and shared details on an industry-wide effort to combat cybercrime.

The new solution, to be called ConnectWise Engage and due to reach market next year, will save channel pros time by consolidating the reams of enablement materials, solution content, and other information provided to them by hardware and software vendors via multiple partner portals in one place.

“Today, it’s chaos out there,” says ConnectWise CEO Jason Magee. “I’ve got to manage multiple vendor portals [and] I’ve got to manage access for my company to those portals, and who’s allowed to do what within each vendor program and portal.”

According to ConnectWise, the average channel partner works with 20 vendors, each of which maintains a separate partner site.

“We all feel it—portal sprawl. You have way too many portals to maintain and log into,” said Magee during a keynote at IT Nation Connect today.

Vendors that wish to deliver partner content through Engage will have to integrate their portal with the new system using APIs and other tools provided by ConnectWise. At present, none of the more than 260 vendors ConnectWise partners with has agreed to support the new platform, which only became known of today, but efforts to recruit them are underway now.

“We have our work to do to get the vendors that are currently in our ecosystem to participate and to adhere to a certain set of standards that will make it easier and consistent for the MSPs,” says Magee, who expects to have a first set of alliance partners in place by next year, possibly in time for ConnectWise’s IT Nation Explore event in June.

Whether vendors will be willing to embrace ConnectWise’s requirements and cede some control over the portal experience they offer partners remains to be seen.

Headquartered in Huntington, N.Y., and founded seven years ago, Webinfinity specializes in helping vendors increase engagement with partners by providing simplified access to people, information, and other resources. Its cloud-based software is used by managers of channel programs, dealer networks, and field salesforces, among others.

In its aspiration to consolidate connections with multiple external companies in one interface, Engage resembles Unite, the billing, monitoring, and management platform for cloud service providers that ConnectWise introduced two years ago and shipped five months later.

It also fits within the vendor’s larger ambition to provide single-pane-of-glass access to everything MSPs need to serve customers.

According to Magee, integration via open APIs with third parties will remain a key part of ConnectWise’s product strategy going forward even though its Continuum and ITBOOST acquisitions put it in direct competition with more outside vendors than ever before.