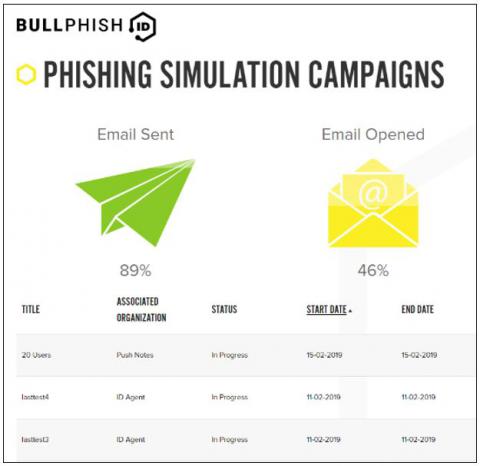 The vendor plans to bundle its new phishing simulation and end user education platform together with its flagship dark web monitoring service, and offer both at prices it says are significantly below what many MSPs currently pay for dark web protection alone. By Rich Freeman
Tweet

The new solution, named BullPhish ID, officially launches tomorrow. Bowie, Md.-based ID Agent plans to sell it and its Dark Web ID product together as a single offering. A new pricing scheme also set to debut tomorrow, will make that consolidated package available at rates well below what many MSPs pay for dark web protection alone at present, according to Dan Tomaszewski, ID Agent’s vice president of channel success.

“Nobody else in the industry is doing what we’re doing at that price and giving you so much value,” he says.

BullPhish lets channel pros deliver mock social engineering attacks to their customers automatically. The system then follows up with videos and quizzes that teach best practices for safe computing. That material is designed to be brief, so end users can complete it without taking large amounts of time away from work.

MSPs can send attacks to users at staggered, random dates and times, so all employees don’t receive them at once and alert one another that a security awareness campaign is underway.

A new reporting tool provides unified data on a client’s latest awareness education, anti-phishing training, and dark web monitoring results in a single document. “It will really give the MSP and their end users a true look at what’s going on from a security risk [perspective],” Tomaszewski says, adding that reports will call out users who not only clicked on a fake phishing link but entered data about themselves on the fake landing page as well.

“We can actually tell you that one of your users went as far as submitting their username and password,” he says.

Both the reporting and staggered scheduling features, Tomaszewski notes, were requested by ID Agent partners, who played a direct part in designing the new solution. “This is really a customized platform to suit the needs of what the MSPs are looking for today,” he says.

According to Streaker, that includes easy installation and operation. Users need only upload user data, select training courses, and set a delivery schedule. “The barrier to entry from a learning curve perspective is extremely low,” Streaker says. “Everything has been packaged and labeled and is ready to go.”

Tomaszewski adds that ID Agent will assist with the setup and configuration process as well, and provide ongoing instruction on the latest security threats and trends. Partners can then position themselves as subject matter experts by sharing that information with their clients.

ID Agent’s new pricing model begins at $300 a month for 30 customer domains containing up to 500 users each. Larger subscriptions come with lower rates that drop as far as $7.69 per domain monthly. “Comparing it to the industry, we’re looking at saving at a minimum for most people maybe between two to three grand a year,” Tomaszewski says, noting that all subscriptions include the incident response advisory service ID Agent rolled out last year, the sales assistance program it added in January, and lead generation support.

The Carbonite-Webroot Deal All Boils Down to One Word
February 8th, 2019

ChannelPro 5 Minute Roundup for the Week of January 20th, 2020