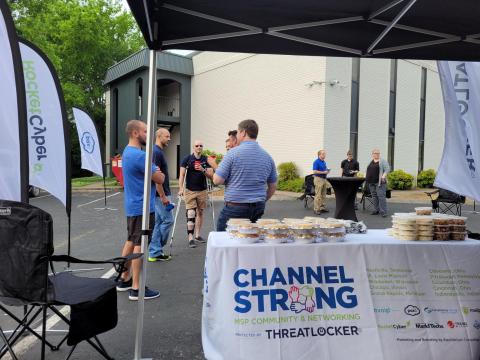 As the country starts to open up, the multivendor effort has plans to continue through the year with a shift toward education. By Colleen Frye
Tweet

The Channel Strong multivendor traveling event took its tour bus to 10 stops through the Midwest in May, starting in Nashville on May 17 and ending in Indianapolis on May 28, gathering local managed service providers at outdoor locations while following all COVID safety protocols. Reflecting the gradual opening up of the country as vaccines roll out and COVID-19 cases decline, the latest leg of this effort changed its “Positive Vibes” theme to “MSP Community and Networking,” according to Ken Patterson, director of channel community for Pax8, and orginator of the tour along with BVoIP CEO George Bardissi. Attendance was also higher in May than in the previous two tours, he adds.

Channel Strong started as a way to stay connected as a channel community during the pandemic while also supporting supporting local food banks in each region of the tour. At in-person industry events, the casual hallway and lobby conversations are often where MSPs learn from each other, and the Channel Strong tour tried to fill that void during the pandemic, Patterson explains. That networking “was the best thing and it was missing,” he says, adding that the tour is now shifting its attention to the future as the country opens up. “We're turning it to more of an educational feel … we're going to still have some games set up and we're still going to have it be casual, but there's education to be had.” He notes that the tour participants include experts in cybersecurity, HIPAA, networking, and more.

Another goal of the tour is to build channel community. At each stop, a local MSP agrees to host the event and an appropriate location is secured. Initially, Patterson says there was some hesitation on the part of MSPs to be gathering with their potential competitors in the market, but he is seeing more willingness to work together. “MSPs need to learn that they're part of a community and they need to work together. We want to get rid of the word ‘competition’ and turn it into ‘coopetition.’” 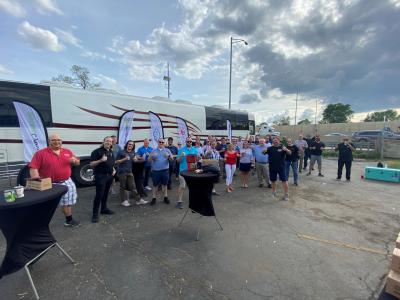 Collaboration is critical to the channel, he stresses. “I also believe that with all these really smart business owners, I think some new things are going to come out. … People are now talking to each other and working with each other. When you put that much brain power together, you can't help but think that something new is going to come out of the ideas that they're all talking about.”

Channel Strong has two more tours planned this year, hitting the Northeast in July and the West Coast in Q4, Patterson says. Cities and dates are being worked out now. And even though travel restrictions are lifting, the bus will continue to roll, he says.

“The tour bus is part of the allure," Patterson says. "I think everybody loves that. And the fact that we're able to go to a city each day gives us an opportunity to maybe also hit cities that don't often get big events or events in general.”

“What makes the Channel Strong tour so exciting is that for over a year the industry has not been able to travel to events. This gives vendors an opportunity to invite all the local MSPs for an afternoon of fun, drinks, food, and a chance to catch up with like-minded professionals on what is happening in their world,” says Joel Zaidspiner, vice president and associate publisher of The ChannelPro Network. “ChannelPro is glad to be part of the tour. We love seeing all the smiling faces of our readers in all the different cities of the tour.”

Learn more about Channel Strong and check out past events at www.channelstrongtour.com.

LG Gram for Business 17 (2020): Big Reasons to Like It
END_OF_DOCUMENT_TOKEN_TO_BE_REPLACED