Catch Security Profits If You Can, Advises ASCII Group at First 2020 Event 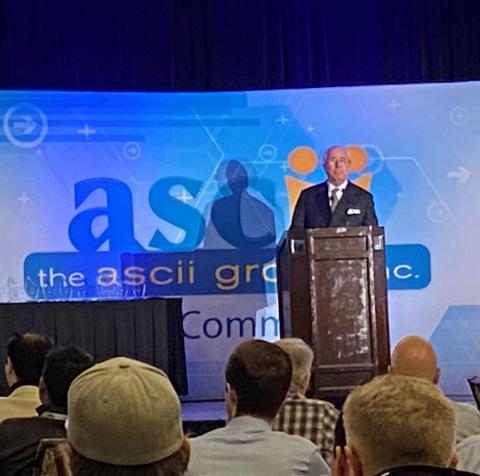 Frank Abagnale, of “Catch Me If You Can” fame, was one of many speakers at the IT membership group’s conference yesterday in Long Beach, Calif., to discuss challenges and opportunities in cybersecurity. By Rich Freeman
Tweet

Frank Abagnale has bad news for you, channel pros. Remember the identify theft he performed as a teenage runaway 50 years ago, which was later immortalized in Steven Spielberg’s film Catch Me If You Can?

“Technology has made it very, very easy to do,” he says.

Abagnale, now a cybersecurity expert and the featured keynote speaker at The ASCII Group’s SMB IT Success Summit events for 2020, spoke at the first stop on this year’s tour in Long Beach, Calif., yesterday. Back in the 1960s, he told his audience, he had to physically visit, or at least call, the victims of his exploits. These days anyone with a laptop and internet access can collect reams of information about total strangers from the comfort of their kitchen—even if that kitchen is in Russia.

“All of this information is a matter of public record,” he notes. As a result, he continued, citing statistics from the World Economic Forum, cybercrime will cost the global economy an estimated $2.9 million every minute this year.

That presents channel pros with both an enormous opportunity and an enormous challenge, according to ASCII Group President Jerry Koutavas. The opportunity, of course, is to pocket a piece of the billions organizations globally will spend on managed security services this year and beyond. The challenge is learning how to provide managed security services. That will be the hardest evolutionary shift most IT providers have ever gone through, Koutavas predicts.

“There are so many nuances and layers to fully understanding how to best run a security practice,” he says. “It’s a tough road. It really is.”

Guiding members down that road is one of the ASCII Group’s top priorities for the year, at its live conferences and in everything else it does. “The MSPs basically know that they have to step up their game in terms of security services, and some are going down the path, but I think the majority are not,” Koutavas says. “That’s where we’re stepping in.”

Abagnale, who spoke at ASCII’s 2017 events too in a presentation that focused heavily on his personal story, spent all of his time in this year’s keynote sharing the same kind of lessons he’s been teaching recruits at the FBI Academy in Quantico, Va., for 44 years.

For example, while most channel pros know to erase or destroy the hard drive on an old PC before disposing of it, almost none are aware that modern printers contain HDDs laden with sensitive information too. In fact, Abagnale noted, when CBS News randomly purchased several used printers, it discovered that they contained data belonging to the Boston Police Department’s sex crimes unit, the California Department of Motor Vehicles, and one of the largest insurance providers in the Northeast.

“Make sure you remove the hard drives from those devices,” Abagnale said.

Other habits worth adopting, he added, include shredding everything of value on paper when you’re through with it, taking advantage of free credit freezing services to keep illegitimate investigators from viewing your financial history, and buying everything you don’t pay for in cash with credit cards, which unlike ATM cards have no direct connection to the funds in your checking account.

Jabra PanaCast Review - Get Your Huddle On
END_OF_DOCUMENT_TOKEN_TO_BE_REPLACED