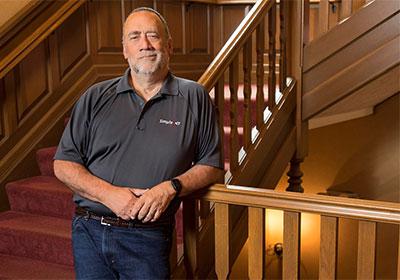 With a co-managed IT services offering, Simplex-IT extends its tools and processes to internal IT departments for a win-win partnership. By Bob Coppedge
Tweet

CO-MANAGED IT SERVICES, or CoMITS as my company calls it, is a true partnership between us and a company’s internal IT department. The idea is to extend a subset of our systems, tools, methodologies, and processes to an organization’s IT staff, which is typically one to three people at the prospects we target, and work with them as a team. We’ve had a great deal of success with this model, which represents about 50% of our new business in the last two years.

COMPANY FOCUS We’re the cool guys in IT: We don’t do long-term contracts and we share everything.

RECOMMENDED BOOK My own! The MSP’s Survival Guide to Co-Managed IT Services (Simplex-IT Press, May 2019)

WHAT PEOPLE WOULD BE SURPRISED TO KNOW ABOUT ME I’m a graduate of Second City and have led an improvisational comedy group for the past 13 years.

Quite often, they turn to what we call “the seagull method.” They bring in a vendor who will squawk, make a lot of noise, scatter a lot of droppings, and then fly away, leaving the IT person holding the bag. The CoMITS model, in contrast, empowers IT people by providing the tools and methods they need to manage their company’s infrastructure.

If you’re considering CoMITS, however, start with introspection: Would this be an easy extension of what you’re already doing? If you’ve got a good profit margin built into your traditional managed services and you use the same rigors here, it should be just as profitable. On the other hand, if you have to invent a whole new practice, it just won’t work because your profit margins will be offset by getting tools and processes in place.

Almost all the tools we use as MSPs can be extended to work with this CoMITS model. Take the ConnectWise Manage PSA system, for example, which has an add-on called StreamlineIT. Autotask has Taskfire. They’re essentially licenses for that internal IT person to handle all the ticketing, documentation, and time reporting. You allow access to the management portal for just that customer’s resources and charge a recurring monthly fee just as you would your managed customers.

Simplex-IT offers three flavors of CoMITS. With full CoMITS, we charge a monthly fee for all of a co-managed customer’s IT needs, including firewalls, backups, anti-virus, cybersecurity training, and more. They’re responsible for maintaining everything with the tools we’ve provided. If the internal IT person chooses to escalate a ticket to us, we take care of it and that’s a billable service on top of the MRR.

Kaseya Acquires ConnectBooster
Oct 13: Your RMM Is Your Most Important Security Tool – 5 Tips To Reduce Risk and Grow MRR
END_OF_DOCUMENT_TOKEN_TO_BE_REPLACED